A young supporter has raised over £700 for Redwings after running a sponsored 60 miles!

Eleven-year-old Oliver Phillips decided he wanted to fundraise for us after his mum and dad sponsored Redwings’ Dotty the donkey, who lives at Ada Cole Visitor Centre, for Oliver as a Christmas present. 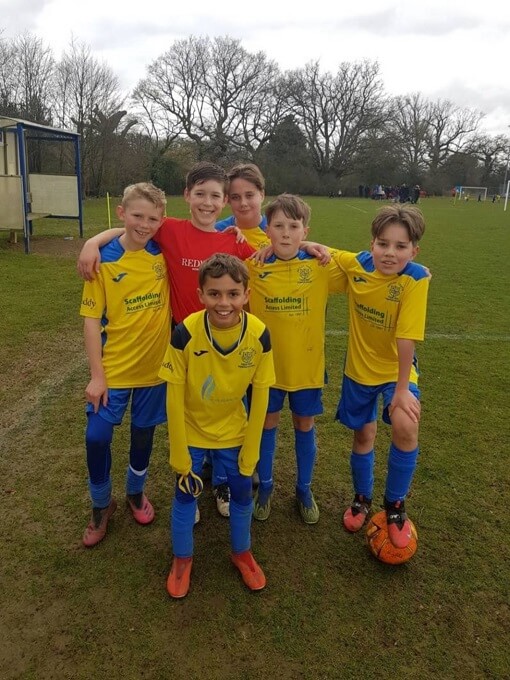 Mum Kerrie Phillips said: “We’re so proud of Ollie and want to say a big thank you to everyone who supported him to complete this challenge.

“Friends from his football team (pictured) all ran two miles with Ollie after a game. He also completed 3 miles at a parkrun.

“We had an amazing neighbour who went out with him on quite a few occasions, and the rest either I or his dad did with him.

“There were times he found it hard, some days his legs really ached, and we had a bit of scare when he got injured at a football match and we thought he might have broken his ankle! Luckily it wasn’t too serious, and he was only out for a couple of days. He was so determined and there was no way he was going to give up until he reached his goal.”

Ollie’s challenge raised an amazing £720 in total which will go towards helping the horses, ponies, donkeys and mules in Redwings’ care.

“We weren’t expecting him to raise anything like that amount, but I posted about what he was doing in some local social media groups and the donations just kept coming! We had some T shirts made for him with ‘Redwings’ on the front and ‘Running 60 miles’ on the back, and people said they’d seen him and wanted to support him. It was really brilliant,” said Kerrie.

Kerrie and his dad, James, set up a ‘finish line’ for Oliver to cross, with red and black balloons, when he completed his 60 miles.

“He did get to the end and say he was really glad it was over but it wasn’t long before he had started to talk about what he wants to do next!” said Kerrie.

Debbie Scott, Head of Fundraising, said: “This is such an amazing achievement and we’re very grateful to Oliver and everyone who helped him with his fundraising efforts.

“We hope his story will inspire others to take on their own challenges in aid of Redwings.”

As a charity 100% funded by donations, it is thanks to the generosity of our supporters like Oliver that we're able to work to promote the welfare of horses, ponies, donkeys and mules. Thank you #redwingsangels!