Redwings Noel gets the hat-trick! 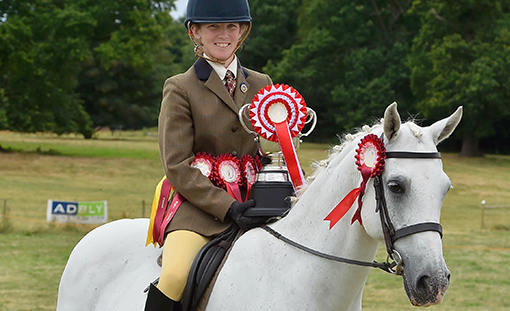 Twenty-year-old, grey Welsh X Arab Noel and his rider Hayley Ward are a true perfect partnership, having won the Supreme Championship at the Kimpton Horse Show in Hertfordshire for three consecutive years – an achievement by a horse and rider partnership that has not been seen at the Show since 1969!

Noel was rehomed to Hayley in 2001 and was originally rescued in 1998 by Ada Cole Memorial Stables (as it was known before merging with Redwings in 2005), when he was found in very poor condition along with his companion Mistletoe; the pair had been left to fend for themselves while their owner was in prison.

Once Noel had recovered from his ordeal in our care of the Sanctuary, his superstar qualities soon shone through and so he was identified as an ideal candidate for rehoming – and that’s when he met Hayley!

“Noel is incredible pony – he’s a pony of a lifetime,” beams Hayley. “At Kimpton he just kept winning, and loved every second of showing off and all the attention – I’m surprised his head still fits in his stable!

“Words cannot describe how immensely proud I am of him. Ever since I began competing at Kimpton I’ve dreamed of winning the Harding Trophy and being Supreme Champion, so to now have won it for the third year running with the same pony just shows how incredible and versatile my Noel is!”

After 15 years with his Guardian, Redwings Noel shows just how important it is that rescued horses are given a second chance at a happy life with a new family.

Rehoming a Redwings rescue horse is hugely rewarding – and who knows where your journey will take you! Check out our rehoming pages if you’d like to give a rescue pony a second chance.