A home for life for Nipper 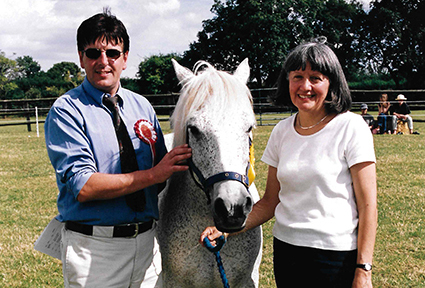 We want to say an extra special thank you to one Redwings Guardian family who provided a wonderfully caring home to a rescued pony for more than 20 years.

Linda and Victor Coleman took on Nipper from the Ada Cole Memorial Stables in 1995. He was ridden by the Coleman’s daughter Sarah, who wrote a lovely letter to Ada Cole staff the following year telling them that having Nipper had given her the best year of her life.

Nipper was an active, healthy 15 year old when he was taken on by the Colemans but even when he retired from his working life, the family continued to love Nipper as much as ever and give him all the care he needed in his later years.

Nipper was an incredible 35 years old when he very sadly had to be put to sleep in 2015. He was with his fantastic Guardians to the end and, after being part of their world for two decades, the Colemans were understandably devastated to lose their special four-legged friend who had been so much a part of the family.

We would like to say a heartfelt thank you to the Colemans for everything they did to give Nipper such a wonderful life for so many years, and for ensuring that this special pony benefited from all the affection and support he needed, right to the very end.

Redwings is incredibly grateful to our Guardians for giving our rescued horses and ponies a new lease of life and all the love and care they deserve. It is because of these amazing people that the charity is able to offer homes to more horses in desperate need of help.