The heart-warming story of Giovanni and Nicole 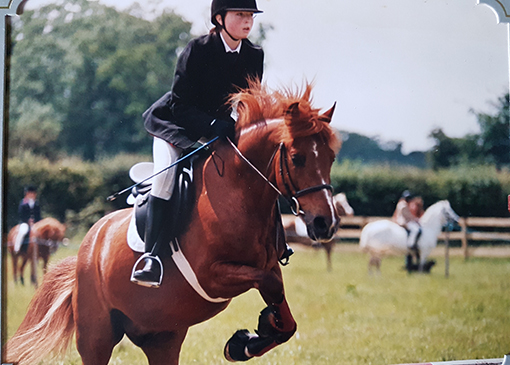 Our rehoming programme gives our rescued horses a second chance to be a part of a loving home outside the Sanctuary – and the hope is that this new home will be for life. Giovanni is a great example, as he spent a wonderful 19 years in the care of his Guardian Nicole, until he sadly had to be put to sleep this spring.

Nicole shared her story with us:

“For 10 years I mucked out other people’s horses, poo picked and cleaned tack, all just for a chance to ride – and I loved it!”

Nicole’s mum Karen could see her daughter’s passion and commitment to owning a horse of her own so began researching rehoming a rescued horse.

And that’s when they met Giovanni! Giovanni had been living in a Guardian home but sadly due to illness his Guardians were no longer able to look after him. A couple of days later Karen went to meet Giovanni and instantly knew he was the one.

Giovanni had arrived at the Ada Cole Memorial Stables in 1989 (before the centre merged with Redwings in 2005) as part of a group of horses whose elderly owner was struggling to care for them. They were living knee deep in muck and the stables were far too small.

Nicole first met Giovanni when her mum introduced him as a new pony who had arrived on the yard. Nicole told her mum that he was just the kind of pony she would love to have and her mum responded by saying, “Well that’s a bit of luck, he’s yours!”

What a lovely surprise! Nicole remembers the moment clearly: “I burst into tears and hugged him so tight, we both knew it was a love that would last a lifetime”.

Gio, as Nicole affectionately called him, was a brave, kind and playful horse. He was turned out in a field with nine or ten considerably larger horses and would tug at the mane of the biggest one until he gave in and played with him. Nicole would watch him playing for hours.

Nicole and Gio spent the following years riding together and learning to jump. Nicole has very fond memories of this time: “He would jump anything! Cross country was fun, he was a natural and loved it – he loved anything where he was free in the open. He also loved the beach and we had amazing times galloping along Camber Sands.”

In 2000, Nicole and Gio entered the Ada Cole show and wiped the floor with the competition, placing in four classes and coming first in Best Condition Ada Cole pony. This day stands out for Nicole: “He really did me proud that day. I only ever competed for fun and we never took it seriously, they were the best years and I will cherish them forever.”

At the age of 27, Nicole decided to retire Gio: “I knew him better than anyone, I was worried he would push himself too far and not recover.” For the next six years Gio enjoyed his life in retirement, until he began developing some lameness issues. And sadly, at Easter this year, Nicole noticed Gio really wasn’t himself and so made the heart-breaking decision to put her boy to sleep:

“It was the hardest day of my life and a day I knew was coming but hoped I would not have to face so soon. He was my first love, my best friend and first baby and always will be forever. I have never cried so much in my life but I know he is at peace now and playing with all of his friends he has lost over the years. My boy has outlived all of his past field mates and companions and never stopped fighting for life.

“Thank you Redwings for allowing me to make the best friend I could ever have wished for.”

If you would like to find out more about becoming a Redwings Guardian and can offer a rescued horse or pony a home for life, click here.