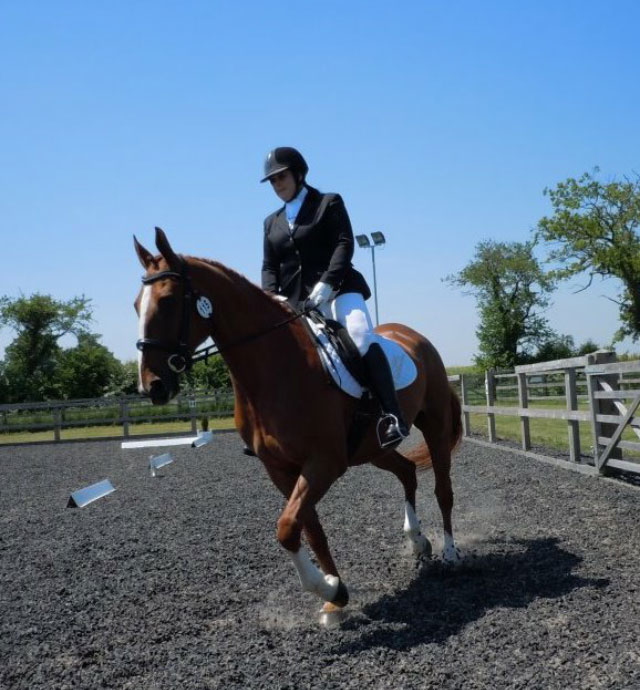 Jessica Cook talks to us about being a Redwings Guardian.

Handsome Thoroughbred Cross Madac arrived at Redwings Horse Sanctuary in 2008 together with six other horses involved in a Trading Standards case in Wales.

The seven horses were found confined in an overstocked field, lacking in food and deep in mud; all were suffering from a lack of basic care including poor body condition and overgrown hooves.

Happily, after a year in the Sanctuary and having been restored to full health, Madac was enrolled on the charity’s rehoming programme – the Redwings Guardianship Scheme – and found a lovely new home with Jessica Cook.

“I'll never forget the day I saw Madac,” commented Jessica. “He was being ridden past the stables with the Redwings rehoming team and was absolutely gorgeous – I couldn't stop thinking about him!

“That evening, I did the sums and spoke to the owner of a yard I had been riding at since I was six years old to see if she had space for me to keep a horse there. As we all know there is nothing cheap about keeping a horse and it is a lot of hard work, but I had the opportunity to give Madac two loving owners as my very good friend and work colleague Ruth was also keen to have a horse. I spoke to her and she was eager to share him with me.

“Having applied for Guardianship of Madac, we had a home check and then had the opportunity to ride him at Redwings’ rehoming centre. We absolutely loved him and returned a few days later to go on a hack – again he was fantastic!

“I’ll always remember the afternoon we got the call to say we’d been successful and could take him home. We cheered for joy and were absolutely thrilled! Rehoming a rescue horse was the best decision I’ve ever made; I couldn't afford to buy a horse like Madac and he has taken us so far, tested us and taught us so much. He’s changed my life!

“Madac is the best thing that has ever happened to me and Ruth; he is even a first "pony" for Ruth's four-year old son Freddie! We have been very successful showing Madac and in dressage and show jumping; we have won prelim reserve champion and champion rehab at our local riding club and have always been placed in all our showing and jumping. Madac also attracts fantastic comments from the judges and is often admired by many!”