Milky Way’s achievement is out of this world! 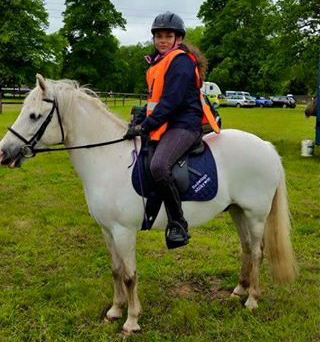 Milky Way (also known affectionately as Lumpy) achieved an amazing second place with his rider Kayleigh in the Endurance GB Junior Championships at the close of the 2015 season and was named the ‘Best Unregistered Horse’ of the year by the association!

This is an incredible result for a 13hh pony but as Jane says, he’s a natural at endurance. “We did quite a few different things with Lumpy when we took him on he was great. But after a couple of years my granddaughter decided to have a go at an endurance ride and almost straight away we knew she and Lumpy had found their favourite activity!”

Although Kayleigh has sadly outgrown Milky Way now, he is such a star that he already has a new local rider keen to help ride and care for him. “He will stay with us no matter what though,” says Jane. “He’s such a character and a real part of our family.”