Raise a glass to lovely Merlot! 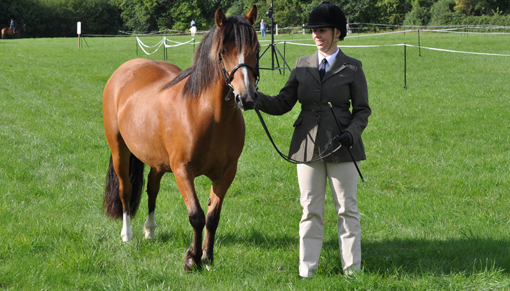 It is almost 10 years since Clare Hasler took beautiful Merlot home to Essex to be a companion pony but love has never faded!

“Merlot is my absolute baby and a real godsend!” says Clare. “Without her I wouldn’t be able to keep my competition horse at home as there are only the two of them. She’s more than happy to wave a hoof to see Ben off as he loads on the lorry, though I think she’s always glad to have him home again too!”

Merlot was part of a herd of 17 ponies rescued from the harsh environment of common land in South Wales in 2004. There were wide-spread problems with lack of grazing, disease, parasites and over breeding in the area at the time and the whole group were in need of basic good food and veterinary care on arrival at Redwings. Merlot was also pregnant and gave birth to a healthy foal called Asti three months after her rescue!

Although Merlot didn’t make the grade as a riding pony, her laid-back nature and good looks made her a perfect non-ridden companion and Clare was delighted when she was told her application for Merlot had been successful.

Merlot isn’t always a stay-at-home companion however. She loves a trip out to do some in-hand showing and ‘princess it up’ as Clare says! She always comes home with a rosette or two as well and Clare says lots of people ask about her and find it hard to believe that such a stunning, well-mannered pony was once struggling to survive as a semi-wild pony on the Welsh hillside.