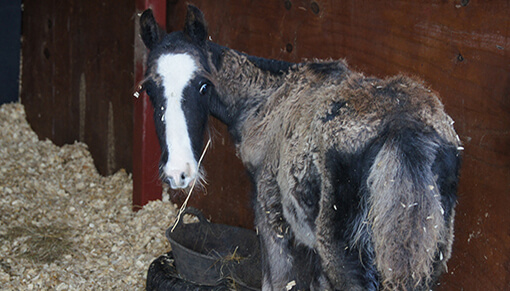 A member of the public who helped Redwings rescue an emaciated and abandoned foal eight years ago is delighted to see his progress by spotting his story in a local newspaper.

Redwings Matty and his Guardian Sarah Prior hit the news recently after they won a rosette at the Norfolk Equestrian Show. Their success was a happy ending to a story which started when Matty was rescued by us in 2013 as an eight-week-old foal with horrific maggot-infested wounds.

Now, in a heartwarming end to the tale, the person who first found him collapsed in a field in Norfolk and called us for help, has reached out to Redwings to say how delighted she was to see his success.

Lin, who raised the alarm, said: “My daughter and I noticed Matty, we could see he wasn’t very old and his coat was extremely matted. He didn’t look comfortable, stamping and trying to itch himself. He was such a sweet boy that he didn’t mind us having a look over him - he really was in an awful state, very thin and crawling with lice and maggots and looked quite poorly. We couldn’t leave him like that so contacted Redwings who thankfully came out and rescued him.

“Then a few days ago I saw the Eastern Daily Press news article about him winning a rosette in the rescue class at the show. I contacted his Guardian through Facebook as I was over the moon to see him looking so fantastic now due to her care and the amazing care and work of Redwings.

“I hope this encourages more people to keep an eye open for these neglect cases and report them to places like Redwings.” 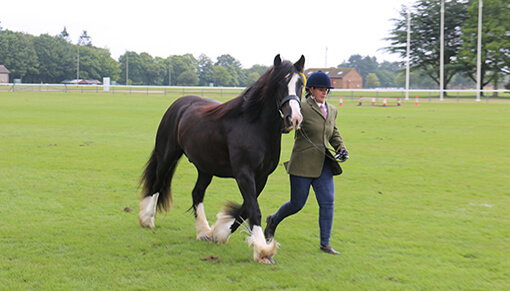 Matty and his Guardian Sarah at the Norfolk Equestrian Show.

Anne Whitehorn, Assistant to Redwings’ Head of Welfare & Behaviour who answers calls made to our Welfare Line, said: “We are always grateful for people like Lin and their diligence. If she had not spotted Matty that day and called for help, then it sadly may have been too late. Our Field Officers rely on members of the public alerting them if they have concerns for the welfare of a horse so that we can determine if they need urgent help.

“We’re delighted that Lin spotted his story and was rewarded for her actions that day by seeing what a handsome horse Matty grew into and his success at the Show. She helped Redwings save a life that day, and thanks to her Matty got the future he deserved – being loved and cared for by his Guardian Sarah.”

If you have concerns for the welfare of a horse you can contact us on their Welfare Line by calling 01508 481008 or find out more information by clicking here.