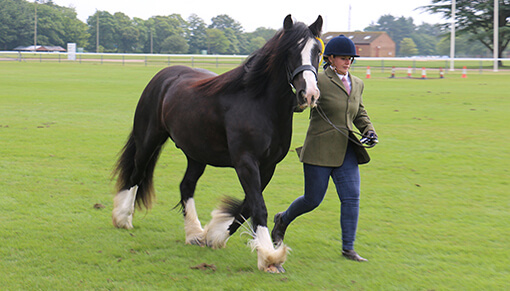 A Redwings rescued pony who was discovered emaciated with maggot-infested wounds as a foal is now a rosette winner in the show ring.

Seven-year-old cob Matty, who received emergency treatment at the Sanctuary and has since been rehomed to Guardian Sarah Prior, was placed third in the Rescue In-hand Class at the Norfolk Equestrian Show on 28th July.

Guardian Sarah, who works as a veterinary surgeon at Redwings and played a key role in Matty’s recovery, said: “I’m so proud of Matty and our rosette! We haven’t been out showing much and to be here at the Norfolk Showground with so many other horses is very new to him. He did such a good job in the ring and a lovely trot for the judges.

“I think Matty shows the joy of the process of rehoming. When he came to Redwings he was as sick as sick can be but, with the care he received, he made a full recovery and is now able to enjoy life in a home and opportunities like this to show what rescued ponies can do. I’m glad the judges could see in him what I do – he is a lovely boy!”

Matty came to Redwings in 2013 at just eight weeks old. A passer-by had found him abandoned in a field in Norfolk and barely able to move.

On arrival at the Sanctuary, it was clear that Matty was severely dehydrated, very thin and with an untreated wound on his leg that was completely covered in flies and maggots. A veterinary examination also discovered that maggots had entered his hoof capsule and were eating away at it from the inside, causing him extreme pain.

It is likely that Matty, whose name was inspired by the once densely matted state of his coat, was abandoned due to the severity of his condition and, if it hadn’t been for the swift actions of that member of the public and the Redwings Rescue team, he would have died in days. 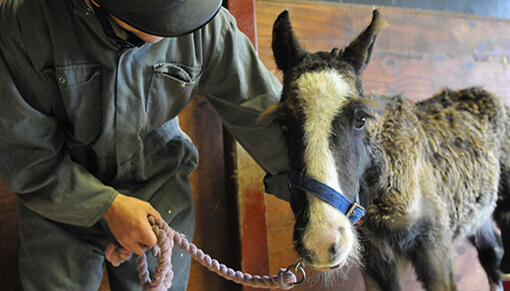 Matty when he first arrived at Redwings.

Meanwhile, Sarah had just started working at our Horse Hospital and was one of the team who provided little Matty with round the clock intensive care.

She said: “It was love at first sight and I knew that one day I would like to offer Matty a home with me. At the time, Redwings waited until horses had turned four before considering them as candidates for its Guardianship rehoming scheme so I waited patiently until 2018 when I could then take my special boy home.

“Matty is so brave and so trusting despite what he went through as a foal. He still always drinks when offered a bucket of water, just like he did so desperately the day he was rescued. He loves a good wither scratch and being groomed.”

Sarah rehomed Matty as an unbacked project, meaning that she took on the responsibility of teaching him how to be ridden after he had received basic training at Redwings. And last year, she offered a home to another Redwings rescued pony, 23-year-old Native cross Oak, to become Matty’s companion and the pair are now inseparable.

To find out more about Redwings’ Guardianship Scheme and the rescued horses currently looking for new homes, please click here.