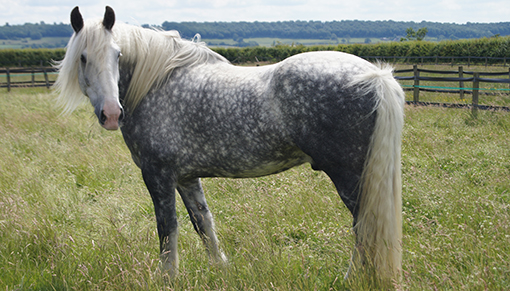 The difficult decision has been made to retire our much-loved Adoption Star Major from the Redwings Adoption Scheme.

This handsome Shire Cross joined the scheme in March 2013, and has since celebrated four wonderful birthdays and has been involved in many activity days and meets-and-greets with his supporters at his home at our Redwings Oxhill visitor centre in Warwickshire.

Unfortunately, Major recently began suffering from lameness in his front feet so we brought him to our Horse Hospital in Norfolk where out expert vets could give him a thorough examination.

Using radiographs, our vets discovered that Major is suffering from arthritis in his right fore. However, by working with the farrier, they've been able to make him much more comfortable.

Major also has a condition called ataxia which can affect his balance and coordination when walking. This is usually manageable, but when coupled with lameness, does mean that he needs special care and close monitoring. Although we hope Major will soon return to Redwings Oxhill, we cannot say for sure whether he will remain at the visitor centre, or whether he may - at some point - need to move closer to our Horse Hospital.

It is for these reasons that we have made the decision to retire Major from the Adoption Scheme. This means that he will not be available to new adopters, although existing adopters can continue to sponsor Major into his retirement.

Major arrived at Redwings in 2012 with his mum, Duchess and companion, Fusilier after a request for help with securing their future.

Duchess, Major and Fusilier were all Shire horses and came from a council run Rare Breeds Country Park where they lived for seven years. Sadly the Country Park was forced to close due to lack of funding and finding the right home for this rare breed was proving difficult, so Redwings was contacted for help.

Major's friendly and gentle nature made him a natural pick for our Adoption Scheme, and so he travelled to Norfolk to Redwings Oxhill to his begin his adoption duties.

If he is able to return to Redwings Oxhill, visitors will still be able to enjoy cuddles with Major every Friday, Saturday, Sunday and Monday. However, we would advise that you call 01508 481000 or 0870 040 0033 to check if Major is present before visiting.

We want to thank all of Major's adopters and visitors for the wonderful support they've shown this very special horse over the years, and wish him a very happy retirement.