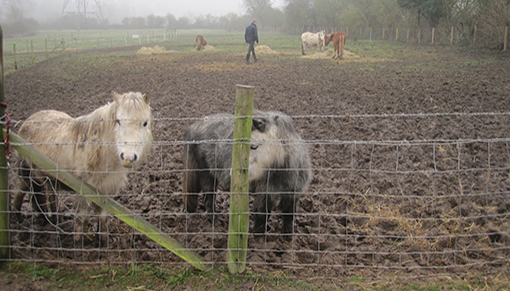 A Leicestershire woman who severely neglected 16 ponies, which sadly led to the deaths of four of them, has been banned from keeping equines for four years with help from expert evidence provided by Redwings Horse Sanctuary.

Kathryn Showell was sentenced at Leicester Magistrates’ Court on Friday 9 March after pleading guilty to 31 Animal Welfare Act offences at an earlier hearing.

The offences related to causing unnecessary suffering and failing to meet the needs of 16 ponies over a period of five months between August 2016 and January 2017.

As well as a four-year ban on keeping equines, Showell was given a 14-week prison sentence suspended for 12 months, and was ordered to pay £150 costs and a £115 victim surcharge.

Showell’s remaining 29 horses will also be signed over into the care of the RSPCA.

Redwings’ vets provided evidence for the case having worked with the RSPCA and other equine welfare organisations to remove 13 ponies in a suffering state from Showell’s care on 19 January 2017.

Prior to the rescue, RSPCA Inspectors had twice provided advice to Showell on improving her animals’ welfare followed by an official warning, but sadly these were ignored.

Two ponies had to be put to sleep as they were so emaciated they could barely stand, while a third had to be put down due to humane reasons and a fourth was unfortunately found dead on site.

In mitigation, Showell’s solicitor told the court that the ponies were her “whole life” but she had been living beyond her means, often going without food herself so she could feed her horses.

Following the sentencing, Nic de Brauwere, Redwings’ Head of Welfare and Behaviour, said: “I was one of three Redwings vets who attended the multi-agency rescue in January 2017 and on arrival it was clear that the ponies were in a state of suffering. There were simply too many horses and not enough resources to meet their needs.

“Consequently the animals were not receiving the basic care they needed with the majority suffering from lice and several in an emaciated condition. It was very upsetting to see and an extensive rescue operation”.

RSPCA Inspector Sally Kearns added: “This was a case which involved a large number of ponies which had been left to suffer of neglect.

“We worked with Redwings, Blue Cross, World Horse Welfare and Bransby Horses to ensure the welfare of these horses and we’d like to thank them all. As a result of the court case, we now have 13 horses in our care, with an additional 29 on their way who will go on to find loving new homes.”