Yesterday, a man from Ipswich was disqualified from keeping all animals. He is banned from keeping animals until the court allows him to do so again, which will be for at least 10 years.

Gussie Lee had previously (11th July 2017) pleaded guilty to causing unnecessary suffering to six horses by failing to explore and address the cause of their poor physical condition at a site near to Paper Mill Lane, Bramford. He also pleaded guilty to failing to meet the welfare needs of these six horses plus another four (10 horses in total) by not ensuring their need for a suitable diet.

During sentencing at Ipswich Magistrates’ Court on Tuesday 8th August 2017, Mr Lee was disqualified from keeping all animals and cannot appeal for 10 years. He was also handed a 16-week suspended sentence for 24 months for causing unnecessary suffering to the six horses and 12 weeks prison sentence suspended for two years for failing to meet the needs of all 10, to run concurrently. He was also ordered to pay £500 costs and £115 victim surcharge.

In January this year, together with the RSPCA and the police, our senior field officer Julie Harding attended the site following concerns for the welfare of the horses, where a non-statutory warning notice was issued to the owner. A revisit revealed that the welfare issues highlighted to the owner had not been addressed. A total of 10 horses were then seized on veterinary grounds following assessment by our attending welfare vet Nicola Berryman.

Six horses were identified as of particular concern being in poor body condition, dull, depressed and lethargic. All 10 horses appeared extremely hungry and the whole field had a large amount of fresh ragwort plants (toxic to horses when consumed) growing amongst the sparse grass. A five year-old skewbald cob (since named Dove by Redwings and pictured above) was given a body condition score (BCS) of 0 out of 5.

Many of the horses were also found to have high worm burdens, suffering from lice, dehydration, and overgrown and cracked hooves. The six horses of particular concern were brought back to Redwings for immediate veterinary attention and have since been signed over into our permanent care. The remaining four were rehomed to the RSPCA.

Commenting on the horses’ condition, Redwings welfare vet Nicola Berryman said: “The group largely consisted of mares with foals at foot, so it was particularly upsetting to see them in this state. The mares were incredibly emaciated, having a body condition score of 0 or 0.5 out of 5.

“Since their rescue, one mare – seven-year-old piebald cob Brook – gave birth to a foal at the Sanctuary who we have named Chad. The group of now seven have all been named along a Suffolk theme and are recovering well. Some have ongoing needs that mean sadly they will not have the opportunity to be rehomed, but they will always have a home with us at the Sanctuary.” 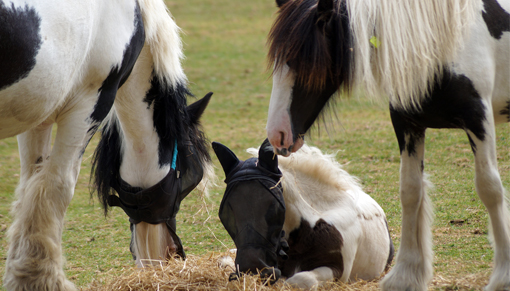 Brook was rescued with her foal Blyth (right) before giving birth to Chad (centre) shortly afterwards at Redwings, all three are doing well in our care.

Reflecting on the sentencing, Redwings’ senior field officer Julie Harding, who has been heavily involved in helping the horses in this area, said: “As always we are encouraged that justice has been served, but struggle to understand how horses can be allowed to fall into this state of suffering. It is incredibly important for owners to be aware of and adhere to their responsibilities in providing adequate care for their horses, as well as to be aware of their limitations or where they may be struggling before it is too late.

“We have been working to help the horses of this area for many years. Following investigations, it was clear that these horses belonged to one owner who was not providing adequate care. This case demonstrates that when there is a need we respond and use the animal welfare legislation available to us to intervene and help bring an owner to account.”

RSPCA Inspector Dave Podmore added: “Despite attempts by the RSPCA and Redwings to work with the owner to improve the lives of these horses, he continued to ignore their plight. We have to operate within the law, and we try very hard to balance the needs of the animals with the rights of the owners to give them a chance to put matters right.  The vast majority of owners care a great deal about their animals and are happy to take advice on that basis.  Fortunately on those rare occasions such as this one where warnings and advice are ignored the law does allow us to step in. In this case we worked closely with Redwings and Suffolk police and we are hugely grateful to their support in securing the welfare of the horses and a successful prosecution."

It is important to note that the defendant in this case is not the same as the current tenant on the nearby Paper Mill Lane site. We would like to reassure the public that we are continuing to keep a close eye on horses at Paper Mill Lane in Bramford and are working closely with the landowner and the tenant to ensure a long-term management plan for the horses and great strides have already been made.