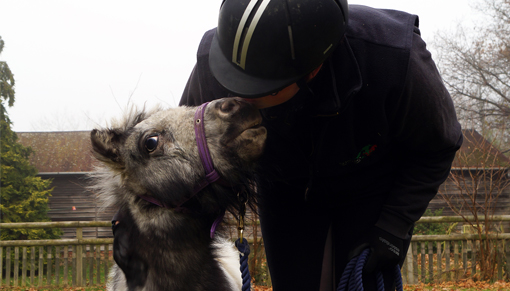 On Monday 24th October 2016, a member of the public reported to Essex police that they had found a very poorly pony in a skate park in Harlow.

The pony – who we believe was less than a year old – required urgent veterinary attention as he was very lame in his hind legs as well as suffering from an ulcerated eye and chronic diarrhoea, and so was seized with the assistance of the local council and taken to a nearby veterinary practice, House & Jackson.

While appeals for information were being carried out, we funded the little appaloosa pony’s veterinary treatment and when an owner could not be found, we offered him a permanent home at the Sanctuary. And it was at this time that we also named him Josh, after the police officer – Pc Josh Haase – who came to his rescue at the skate park.

Watch the video of when Pc Josh Haase was reunited with our pony Josh:

Six months have now passed since Josh’s rescue but his recovery has not been straight forward. He has needed to spend an extended period of time at our horse hospital to investigate his persistent diarrhoea and although it is not causing him any discomfort, our vets believe poor Josh will not regain full sight in his eye.

However, in February Josh was well enough to return to Redwings Ada Cole where the care team will continue to help him in his recovery and we are optimistic for a bright future for him at the Sanctuary.

See how happy Josh was to be back at Redwings Ada Cole in this video:

If you’d like to help us continue to be there for ponies in need like Josh and help this little chap in his recovery, please donate below:

"We Love Donkeys" is coming to you this Easter!