The RSPCA is appealing for information after 26 abandoned horses were rescued from a site in Highclere, Hampshire.

Hampshire Constabulary obtained and executed a search warrant on Thursday 12 October after concerns were raised about the welfare of the horses.

Together with RSPCA inspectors, Hampshire Constabulary County Watch officers and World Horse Welfare, four members of our team helped to round-up and remove the horses.

Unfortunately, the horses seized were not microchipped making it difficult to identify an owner so the RSPCA have launched an appeal for information. 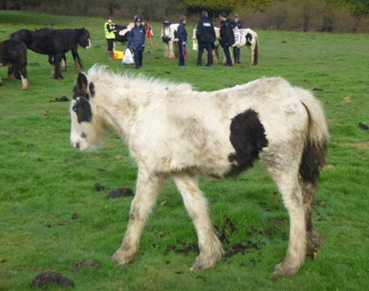 RSPCA Operational Superintendent Lee Hopgood, who praised the police and charities for working together to help the horses, said: “We are keen to hear from anyone who has any information regarding these horses and urge them to contact the RSPCA on 0300 123 8018.

“These horses had to be removed after a vet sadly confirmed they were all either suffering unnecessarily or their needs were not being met.

“We also urge people to seriously think about the commitment involved in caring for horses as this sadly happens far too often.”

Julie Harding, Senior Field Officer at Redwings, said: “This rescue is another great example of effective partnership working among the equine welfare charities; however this is also sadly another example of an owner not taking responsibility for or meeting the needs of their horses – indeed in this case choosing to abandon without water or forage. As a result many of the horses were in very poor condition, which was very upsetting to see. We hope the RSPCA are successful in their appeal and urge anyone with information to come forward.”