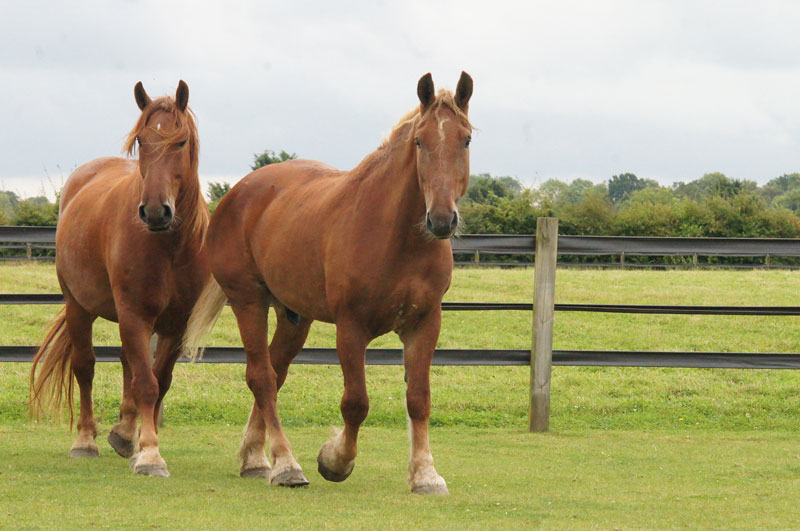 Suffolk Punch geldings Wilf and Stanley were rescued in August 2014 from a site in Norfolk where they had been kept in a barn for over a year.

When discovered by our Senior Field Officer Julie Harding, it was evident the pair were not receiving even basic care – shut in the barn they had no opportunity for exercise, their feet were in a very poor condition having not been trimmed in some time and Wilf was suffering from severe sweet itch that had caused the majority of his mane to fall out.

Wilf and Stanley – both 16hh and seven years old – had been together since birth and consequently are extremely bonded to one another. With the agreement of their owner, the pair were signed over into our care so they could receive all the veterinary treatment and specialist care these rare breed boys needed.

Following their arrival at the Sanctuary, it soon became apparent that they had challenges which were more than skin deep. Having been kept in a barn, Wilf and Stanley had little experience of being handled and subsequently found handling of their legs particularly distressing.

So it was back to basics for our boys. As a flight animal, restricting the movement of a horse’s leg – during routing procedures such as farriery for example – can cause a great deal of anxiety. With the help of a handy (quite literally) prop – a stuffed glove on the end of a pole – our Behaviour Manager Sarah Hallsworth worked with the pair in desensitising them to having their legs touched while remaining at a safe distance.

The training with our boys is ongoing, but like true stars are improving every day and it is such an honour to be able to work with these magnificent animals.