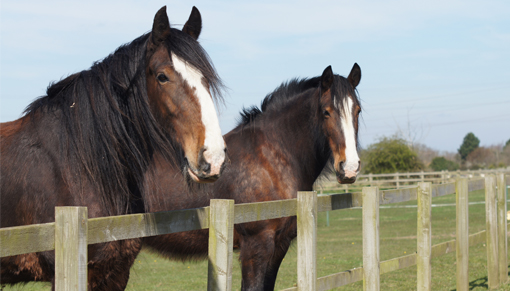 We’re incredibly sad to announce the loss of our much-loved Shire horse Gemma, whose touching friendship with Adoption Star Poppy had captured the hearts of supporters for years.

Stunning gentle giant Gemma and fellow bay Shire horse Poppy had been inseparable since first being introduced to each other at our Caldecott visitor centre, near Great Yarmouth, in 2013.

But, sadly, the heart-breaking decision was made to put Gemma to sleep on Wednesday 26th April. She was 15 years old. Despite the best efforts of our veterinary ad care teams, Gemma had developed painful and incurable lameness in one of her hind legs. Investigations were carried out to discover the cause, but to no avail and sadly no amount of medication could make her comfortable.

Poppy is currently being kept under the watchful eye of the vets at the Redwings Horse Hospital, at our headquarters in Hapton, south of Norwich, where she’s been paired with a new companion – a large cob cross called Tianna – to help her adjust to life without Gemma.

It is hoped Poppy, who is one of our popular Adoption Stars, will return to her home at Redwings Caldecott as soon as possible where we’re sure all the extra love and fuss from her visitors will also lift her spirits.

Lynn Cutress, Redwings’ Chief Executive, said: “We’re desperately sad to lose our beautiful Gemma who was a favourite of our supporters and, of course, a wonderful friend to Poppy. Both of these horses were in need of companionship and we’re so proud that we were able to help them find each other.

“They were like twins – one was never far from the other and their similar colourings and markings had many wondering if they were seeing double! No horse will ever replace Gemma, but with the love of her carers, new companion and supporters we know Poppy will continue to live a very happy life here at Redwings.”

Gemma arrived at the Sanctuary in 2009, but had been looking for a new best friend since her field companion Ellie passed away in 2010. Meanwhile, Poppy was lonely after losing her mum – and had even tried to befriend a pheasant! Her former owners knew she needed the friendship only a horse could give and reached out to Redwings for help.

Gemma and Poppy struck up an immediate bond, and it was a pleasure to watch their relationship over the years as the more outgoing Gemma helped bring the formerly shy Poppy out of her shell and settle into life at the Sanctuary.