Working together to secure the future of over 40 horses 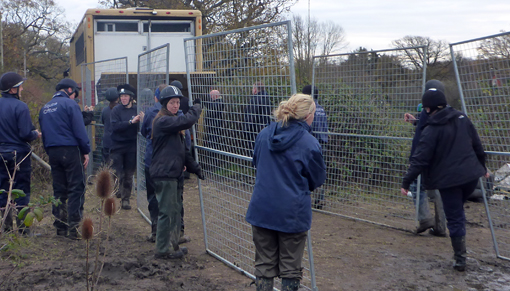 At the start of December, we joined forces with the RSPCA, World Horse Welfare and The Donkey Sanctuary to round up and remove 44 horses and ponies from a site in East Sussex.

Concerns had been raised for the welfare of the horses going into winter, and insecure fencing and inadequate grazing meant horses were roaming the one-hundred-acre area and at risk of escaping onto roads. The majority of the horses were also unhandled meaning routine veterinary care – worming, vaccinations, farriery – as well as any further veterinary treatment that may have been required with the onset of winter was impossible.

With the co-operation of the owner the horses were signed over to the RSPCA and all 44 rehomed to World Horse Welfare.

The joint operation took two days (01 and 02 December) and as many of the horses were unhandled the expertise of our welfare team was called upon to round up the three distinct groups of horses and ponies.

“It was vitally important that the teams worked together seamlessly over the two-day operation,” reflects our Head of Welfare and Behaviour Nic deBrauwere. “It was great to work with World Horse Welfare and the Donkey Sanctuary, and to be reunited with our RSPCA colleagues who’d previously attended Redwings’ round up training course in October.

“Rounding up three large groups of unhandled and nervous horses in an environment with an insecure perimeter creates a great deal of risk, so it was important for the operation to be carefully managed and for everyone to co-ordinate their efforts to ensure the safety of the horses.

“We hope all horses have a happy and secure future – well done team!”

World Horse Welfare Field Officer, Emma Swadlo, said: “This joint operation is a brilliant example of effective partnership working and the results it can achieve.

“We have been working with the horses’ owner for quite some time and we are pleased that he has taken the responsible decision to sign over the horses to World Horse Welfare, safeguarding their future and preventing any further welfare problems.”

Similarly, RSPCA Inspector Becky Carter who headed up the RSPCA team on the day said: “A huge part of our work involves dealing with unwanted horses, and so to organise an operation such as this which sees the horses safely removed and transported to rehoming centres before their welfare declines is a great positive for us and the other equine charities.

“Our great thanks go to the teams from World Horse Welfare and Redwings for their fantastic efforts in this operation, and also to the Donkey Sanctuary who kindly provided transport for some of the horses.”