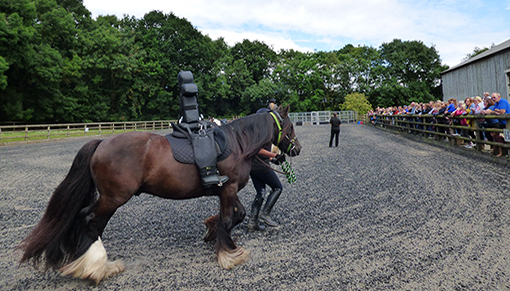 We were “incredibly proud” to have been named as a finalist at the inaugural Charity Awards hosted by SEIB Insurance Brokers on Monday 23rd April.

Redwings was one of just eight charities to have been voted through by the organisation’s clients to a shortlist in with the chance of being awarded a grant of £50,000.

The winner of the grant was announced at the awards ceremony - held at the Grange City Hotel in London - and while we did not come away with the main prize, we were delighted to be given a donation of £400.

We will use the donation to purchase a new Ardall unit used by our Rehoming team to train our rescued horses how to be ridden so they can find loving Guardian homes outside of the Sanctuary - as demonstrated above at our Hapton Open Day last year.

Lynn Cutress, Chief Executive, said: “We’re incredibly proud to have been voted by SEIB’s clients onto the final shortlist for this amazing grant - thank you to everyone who cast a vote for us!

“While we were not awarded the main prize, we’re very thankful to SEIB for its support, for helping us to highlight the important work we do, and for its kind donation of £400 which will support our rescued horses in finding new Guardian homes."