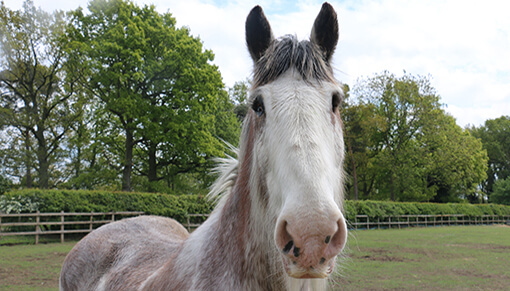 Redwings has said a tearful goodbye to one of its most well-known and beloved rescued residents.

Boo, a blind Clydesdale cross, was put to sleep just before Christmas when it was no longer possible to manage his lameness issues and the arthritis in his hind legs.

The heart-breaking decision meant he would not face the debilitating discomfort his condition would have inevitably caused and he was put to sleep surrounded by our vet team and other members of our staff who had lovingly cared for him for over a decade.

Stunning gentle giant Boo, who lived at our headquarters in Norfolk, came to the Sanctuary in 2009 after he was callously shot in the eye by intruders at point blank range with an air rifle.

This horrific attack was doubly distressing for Boo as he had already lost one eye to cancer, which meant he was left completely blind.

Having been advised that it would be kindest to put him to sleep, his distraught owner rang the Sanctuary to see if we could offer Boo a last-minute reprieve and provide him with the specialist care he would need for the rest of his life.

We welcomed Boo with open arms, and he would go on to live a very happy 12 years with us.

Thanks to the help of his field companion and ‘seeing eye’ horse Flynn, Boo was able to confidently explore his paddock and would even gallop to the fenceline when he heard his name - an impressive feat for a heavy horse who couldn’t see!

His incredibly friendly nature – and love of a scratch and a cuddle – meant he was a very popular resident with Redwings’ supporters, especially during open days at our headquarters, and he often featured on our Christmas cards and gift items.

In 2020, his moving story was told in an animation, narrated by Stephen Fry, which helped to raise thousands of pounds in support of our work so more horses in desperate need, just like him, would have the chance to be offered a new, safe home at the Sanctuary.

Lynn Cutress, Chief Executive, said: “We’re incredibly sad to have had to say goodbye to our dear Boo. For me, he summed up just what Redwings is about – providing lifelong specialist care to horses who otherwise would have nowhere else to turn – and through our heartache we take comfort that we were able to give him so many happy years.

“His story of courage inspired many and he was always so popular with our visitors at our open days – and, of course, he lapped up every minute of attention which was wonderful to see, especially for a horse that had survived such a terrible act of cruelty.

“To see his paddock, which is just outside our administrative offices, now sitting empty feels very strange. Boo would regularly be found hanging his head over the fence in the mornings waiting to greet everyone as they arrived for work. In fact, when our vets had the unenviable job of breaking the news that we were going to lose him, there was a queue of staff outside the Horse Hospital as everyone wanted to give him a final cuddle.

“The Sanctuary will simply not be the same without him.”

Boo’s field companion Flynn is doing well and has been introduced to a new friend. In time, the pair will join a new herd together.

As a charity 100% funded by donations, it is thanks to the generosity of its supporters that we were able to offer a happy home to Boo for so many years.