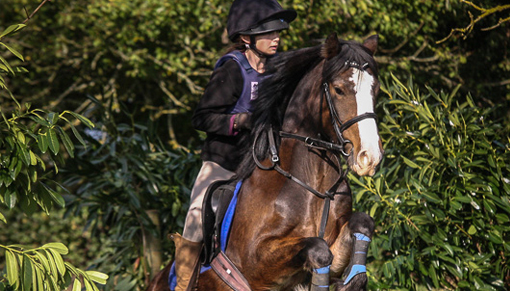 Bonsai has been living with the Draper family since 2014 and he and his rider Keira are having a great time facing new challenges together – from Pony Club rallies and cross country to hacking and dressage!

Bonsai was born at Redwings after his mum Snowberry was one of 22 horses and ponies rescued from a 200 acre site near London in 2007. Most of the mares were in foal when they were rescued and the pitter patter of tiny hooves was a regular occurrence at the Sanctuary for several months after their arrival!

Bonsai has grown into a lovely young chap who has found his perfect Guardian home where he can enjoy life to the full as well as getting all the love and care he needs. Mum Carolyn explains that Bonsai can still be wary of new things, but soon responds with a bit of reassurance. “He didn’t know what to make of bicycles at first, but he doesn’t bat an eyelid at them now! He and Keira are growing in confidence together and becoming a real partnership, it’s lovely to see.

“Rehoming Bonsai has been fantastic, he’s a brilliant pony but there’s always support there from experienced people who know and care about him as much as we do. It’s great to know that we have the perfect pony for Keira and are helping Redwings to rescue more horses too!”