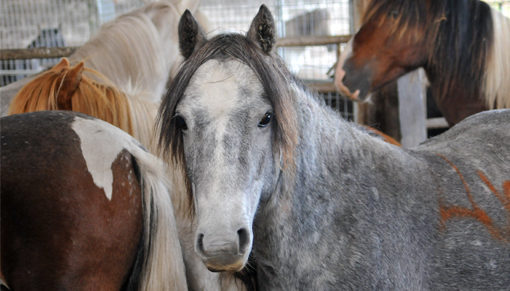 Following recent press coverage about the ponies of Bodmin Moor, the Bodmin Moor Commons Council has issued the following statement:

"We’re encouraged by BBC News’ report (Tuesday 22 November 2016) about the plight of the Bodmin Moor ponies as this helps in further highlighting the issues there and bringing them to the national fore.

Indeed, we have been striving to ensure the welfare of these ponies for several years and the work of the Bodmin Moor Commons Council, The Association of Bodmin Moor Commons Landowners, APHA and welfare charities has, this year in particular, been well documented.

We are grateful to the Devon and Cornwall based centres Adamsfield Equine, Bodmin Moorland Pony Rehabilitation, Bolenowe Animal Sanctuary, Mare and Foal Sanctuary, and Shires Holt. All have taken in ponies rescued and removed by the Bodmin Moor Commons Council and the APHA this year, as did national charities Redwings Horse Sanctuary and Bransby Horses to support us through a most difficult winter.

With the establishment of the Bodmin Moor Commons Council it was possible to begin working towards a more sustainable future for the ponies on Bodmin Moor. This September, a four-day multi-agency operation saw colleagues from the APHA, Redwings Horse Sanctuary, Blue Cross, Bransby Horses, British Horse Society, RSPCA and World Horse Welfare coming together to microchip, passport and health check all ponies on Eastmoor.

It is thanks to the concerted and unfailing efforts, and effective partnership working of all involved, that this large-scale operation was able to be a true success. Significant strides have been made in safeguarding the future welfare of Eastmoor ponies – those with owners have been clearly identified, and those unclaimed are being supported in finding new homes thanks to Redwings Horse Sanctuary, Mare and Foal Sanctuary, Blue Cross, Bransby Horses, RSPCA and World Horse Welfare."

To find out more about our work to help the ponies of Bodmin Moor, click here.

Our Spring 2021 newsletter is out now!