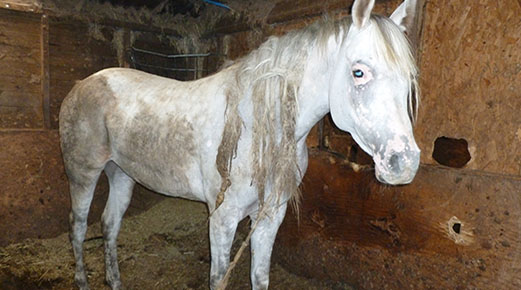 The owner of 31 Arabian horses rescued from squalid conditions at a site in Blackpool last year has been convicted under the Animal Welfare Act and banned from keeping all animals for 10 years.

Redwings Senior Welfare vet Roxane Kirton joined the RSPCA, the police and representatives from fellow equine charities when a warrant was executed on the property in September 2018.

Conditions were so poor, some of the horses had to be broken out of their stables.

RSPCA Inspector Carl Larsson said: “There were 31 horses in dilapidated stables which had not had the doors opened in months, some of which had to be forced open with a hammer and screwdriver. Dirty bedding was stacked halfway up the doors and once opened they wouldn’t close again because so much muck spilled out.

“There were horses with such crippling lameness from overgrown hooves that their legs were shaking with pain. They were unable to step down off the pile of muck out of their stables. One collapsed as it reluctantly made its way off.

Please be warned that the below video, filmed at the time of the rescue, is very distressing.

In total 24 horses were caused unnecessary suffering as a result of a lack of attention to their feet and teeth.

Nicola Haworth was convicted of two offences under the Animal Welfare Act at Blackpool Magistrates’ Court in her absence on Monday 8th July.

She was sentenced on Tuesday 9th July, also in her absence, when she was disqualified from keeping all animals for 10 years with no appeal for five years and given a six month curfew order between the hours of 8pm-6am.

She was ordered to pay costs of £4,000 and £85 victim surcharge. She was also deprived of the 20 horses that are subject to the case, and these will now pass into the RSPCA's care.

In mitigation, the court heard that Haworth was suffering from mental health issues.

Inspector Larsson said: “I want to say thank you to everyone who has helped these animals so far - World Horse Welfare, HAPPA, Redwings and Bransby Horses - who both sent staff to help on the day of the warrant - and of course the vets and police.

“And I want to thank those who have offered to help - we will be taking many of you up on it - as we work with breed specific organisations and experienced owners to find homes for the surviving horses.”