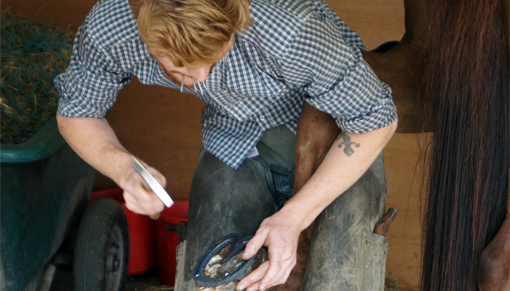 Well done to Jack Vickery who has spent the last year competing as part of the England Apprentice Farriery Team.

Jack, who has been making shoes for Redwings’ horses and ponies for over three years as a member of R.G. Rush Farriers, was called up to the team for 2016 earlier this year after excelling at a trial competition.

The trial involved Jack having to make three horse shoes to differing specifications against the clock – similar to the types of challenges he would end up facing as part of the national apprentice team.

He was named as the reserve in the five-person squad, but went on to compete in the BFBA International Team Competition at Stoneleigh, in Warwickshire, this September where the England apprentice team came third out of over 10 countries.

Jack has also enjoyed success at local competitions – not just placing first in apprentice categories but senior categories too!

He said being a member of the national apprentice team had given him the opportunity to work alongside and learn from some of the best farriers in the world.

“It’s been a brilliant experience. Competing at such a high level makes you push yourself further and you improve quicker,” he said.

On his experience of working with Redwings’ rescued horses, he said: “It’s the best place to train. Working here gives you an experience which is second to none.

“A lot of other apprentices will only work with certain types of horses, but here you get to work with all breeds as well as a lot of nervous horses. You also learn a lot about therapeutic shoeing so I think I’ve progressed much further than others would have in the same time.”

Jack is now concentrating on completing the final year of his apprenticeship. We wish him the best of luck and who knows what 2017 may bring…!