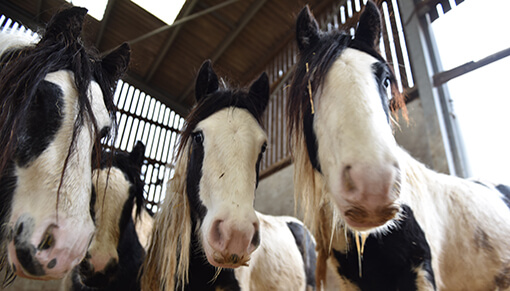 Redwings has joined an unprecedented coalition of 50 animal welfare charities urging the Government not to waste a ‘once-in-a-generation opportunity’ to redefine our relationship with animals through a new animal health and welfare strategy.

The group has released a new report - “Act Now For Animals” - setting out the sector’s priorities for creating a society which rebalances the way we rear, live and work with animals.

The paper sets out 40 recommendations - including measures to improve horse, pony and donkey welfare and others which cover farmed animals, wildlife, exotics and animals used in laboratories.

You can read the coalition's full Vision Paper here.

Crucial to the paper’s recommendations, is the role of the new Animal Sentience Committee. For the Government to fulfill its commitment to recognise animals as sentient beings, the coalition are clear that the committee must have real teeth. It must be independently chaired, made up of the leading animal welfare experts in the country and be able to meaningfully hold Ministers to account.

Nic de Brauwere MRCVS, Chair of the National Equine Welfare Council and Head of Welfare at Redwings said: “We call on the Government to make the most of this opportunity to create a new vision for welfare that really puts the animals at the centre. We want to see a strategy that accounts for more than just their basic needs but also focuses on those things that can improve their quality of life and wellbeing so they have a positive experience in all their dealings with us.”

Chris Packham, who has lent his support to the charities, added: “The last animal welfare strategy was 17 years ago in 2004 and so much has changed since then. The past two decades have seen an attitudinal change in the public and growing scientific understanding that animals have emotions, feelings and needs and deserve a good life.

“We must act now for animals and ensure the Government does not squander this opportunity to build a world-leading animal welfare strategy, fit for the 21st century and deserving of this nation of animal lovers.”

The report highlights that National Equine Welfare Council members took in 186 horses, ponies and donkeys from struggling sanctuaries or rescue centres in 2019 alone.

Lynn Cutress, our Chief Executive, said: “We have always claimed to be a nation of animal lovers and we know that by and large it’s still true, if only from the sheer number of letters received by our MPs on issues of equine and animal welfare from the public. That’s why it has been so crucial to see the animal welfare sector unite on this document, and it’s vital that we continue to work together to get it right for the animals that mean so much to us.”