Rescued Shetland settling in at Mountains 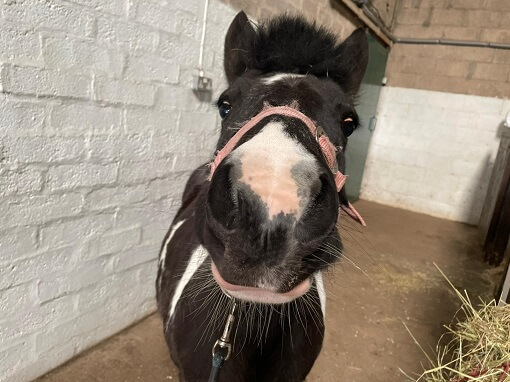 A Shetland pony who was rescued by the Scottish SPCA is settling into her forever home at Redwings Mountains.

Indy – who’s 22 years old – will be turned out with a small herd at the centre near Forfar, in Angus, when she has completed quarantine.

And there was a nice surprise for both Indy and Senior Team Leader Kirsten Macpherson, who are old friends.

Kirsten cared for Indy for a year at the Scottish SPCA, where she worked at the time, after Indy was rescued. She was amongst a herd of over 60 ponies seized in 2018 after being left to fend for themselves in a field. Their owner was prosecuted. All the mares were pregnant including Indy, who sadly lost her foal to tetanus.

Kirsten said: “I worked with Indy quite closely. Like all the ponies that came into the Scottish SPCA as part of the rescue, she didn’t show any signs of having been handled at all.

“She is much better now which is testament to all the hard work that was put into her by the Scottish SPCA, though she does still have some nervous traits. She’s really come out of her shell in the short time she’s been with us though, and is interested in interacting with the team – especially if there is food involved!

“It was such a lovely surprise to see her again and I’m so happy that Redwings Mountains is going to be her forever home.”

The hope is that Indy will be able to move in with a bigger herd eventually, once her confidence has improved.

Catherine Buchanan, Centre Manager at Redwings Mountains, said: “She’s doing well so far and has made a lot of new horse and human buddies already – as well as being reunited with her old friend Kirsten. We’re giving her all the TLC she needs to have a long and happy life with us here at Redwings Mountains.”

Laura Hopkins, Senior Animal Care Assistant at the Scottish SPCA’s Aberdeenshire Animal Rescue and Rehoming Centre said: “We’re so pleased Indy has finally found somewhere she can live out the rest of her days happily.

“It’s fantastic she’s made lots of new horse and human friends as well as being reunited with Kirsten.

“Indy has had a long road to finding her forever home, but we’re delighted she’s finally going to get the love and care she deserves.”

As a charity 100% funded by donations, it is thanks to the generosity of our supporters that Redwings is able to take in and care for ponies like Indy. Thank you all!