All equines great and small at the 2016 Redwings Show 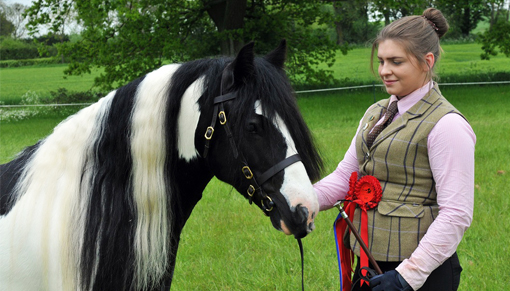 On Sunday 15th May, 135 competitors attended our annual horse show at Topthorn Equestrian Centre in Suffolk – a notable increase in attendees on the previous year.

Participants competed in more than 50 classes including Donkey Breed Society affiliated classes, ridden hunters, novice and those just for fun, as well as the welcome return of the heavy horse classes – first launched at our 2015 Show.

The 2016 Supreme Champions were Stephanie Turner and the beautiful coloured Doylan Precious Gift. Delighted with their success at the Show – the pair were also winners of Ridden Coloured, Ridden Part Breds and Ring One Championship under judge Sue Palmer – Stephanie said: “It really shows that all the preparation is worth it. It’s so pleasing for everyone who has worked so hard.”

“It’s been a lovely event,” Stephanie added. “We like to come and support these shows if we can. Everything has been run so well.”

Commenting on their success, Chloe’s mum Sarah Gibson said: “We’re so pleased, especially considering when we came here today we were just hoping he was going to behave for the judges in the ring! To have been decorated makes us so proud of him. We’ve had such a fantastic day.”

Deciding on this year’s Supreme Champion proved quite a challenge for the judges with many talented and beautiful horses in the running – not forgetting the Ring Three Donkey Champion Romanhill Dillydaydream as judged by Britt Evans. Experienced eight-year-old Dilly is proving very talented in the show ring, especially having been previously named Champion at last year’s Suffolk Show.

Handler Zoe Norton said: “Dilly loves the attention, she even goes out on Palm Sunday parades.” Zoe was particularly pleased with the attention given to the donkeys at the Redwings Show and their inclusion in the Supreme Championship. She added: “Donkeys don’t always get the recognition they deserve and are not always taken as seriously but we put in just as much effort into their training and getting them ready for such events.” 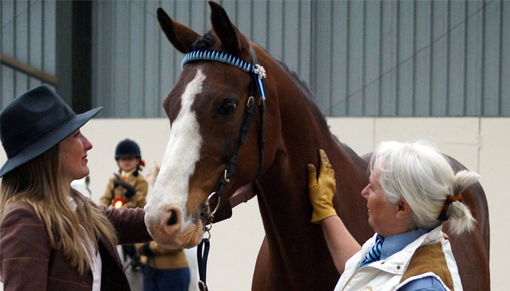 The 2016 Spillers Best Condition Championship went to Karen Sturgeon and the stunning Jurgen who were winners of the In-hand Veteran. Redwings Felledge Henry ridden by Alison Petts stood Reserve having won the Ridden Best Rescue class. Indeed, this year’s show proved a great success for Redwings’ rescue horses and their Guardian families.

Redwings Teddy was also in the running for the Best Condition Championship having previously won In-hand Best Rescue with Anna Hales as judged by Nicky Jarvis, while Redwings Blade won My Best Friend with young rider Ruby Armstrong.

Commenting on the novice horses and competitors, Ring Two judge Sam Allchurch said: “I was so impressed with the quality of young, novice horses coming through; they’re destined to make great waves in the showing world. It was also fantastic to see so many competitors coming to their first ever show and I hope this has been a real confidence builder for them; they all did so well!”

Ring Five was host to the working hunter classes and were judged by Redwings Show organiser Stacey Harvey. The Championship went to Actaeon of Hardingley and rider Grace Donnor, and standing Reserve was Mr Hector with rider Amelia Short who last year took Supreme Champion with Cairnside Houdini. Meanwhile, the eagerly anticipated heavy horse classes in Rings One and Four did not disappoint with beautiful Percherons and Shires, and even a Suffolk Punch, in attendance; Hightown Cassie and rider Nicola Dewnip took the Heavy Horse Ridden in Ring One, while Prince Harry and his handler Kurt Manders took Heavy Horse In-hand in Ring Four.

Reflecting on a wonderfully fun – and sunny – day, show organiser Stacey said: “Now in its seventh year, the 2016 Redwings Show was one of our best yet – a sentiment felt by everyone involved in its organisation and those who attended.

“We’ve had so many lovely comments from entrants saying how much they enjoyed the day, and the quality of competitors was incredibly high. We try to make everyone feel welcome and it’s been really encouraging to see so many people taking part in their first ever show or returning to competing having taken a break from the showing arena.

“Thank you so much to everyone who came along to take part or support the Show, and we look forward to seeing you all next year!”

For professional photographs from the Redwings Show click here.