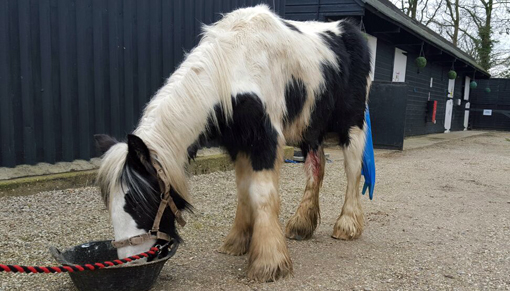 On Wednesday 24th February 2016, we rescued a severely neglected pony (since named Liquorice) who was found fly-grazing in a residential area in Essex.

The 13hh piebald cob – who is estimated to be three years old – was seized under the newly introduced Control of Horses Act (England) following a telephone call to Harlow council from a resident about an abandoned pony.

Meanwhile, our welfare line had also received a call from a concerned member of the public, following which Senior Field Officer Jo Franklin attended, together with a veterinary surgeon from nearby House and Jackson Equine Clinic.

“We were met with a very sick filly on arriving at the site,” commented Jo. “She was extremely thin with a body condition score of 0.5 [normal BCS is 3]. Her back legs were also covered in diarrhoea and she had a weeping wound on her right hind leg.”

Liquorice is now receiving veterinary treatment at House and Jackson, which we are funding and hope to be able to give her a permanent home at Redwings.

Initial treatment has included wound care and feeding rehabilitation to build Liquorice’s strength; however we have grave concerns for the extent of the wound on her leg and whether she’s at risk of serious infection and permanent damage – especially as at this time she is too weak to survive surgery.

“We are really saddened by Liquorice’s neglect and abandonment,” commented our CEO Lynn Cutress. “In fact, this is one of the worst cases we’ve seen this year and call on the help of our supporters to enable us to fund her care.

“Liquorice’s case further emphasises our battle in the current horse crisis as again we have been called upon to pick up the pieces irresponsible horse owners leave behind. We are continuing in our fight, but we cannot do this alone".

With your support, we can continue to help horses in need like Liquorice, click here to help us today.