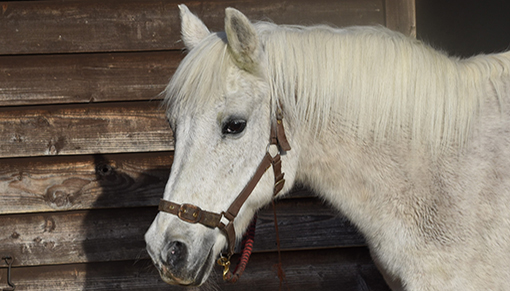 Redwings Tequila Sunrise has the very special title of being our oldest horse in a Redwings Guardian home and is celebrating his 36th birthday today! (5th November 2019)

He has been with his Guardian Carol in Hertfordshire for 15 years, having been rehomed from Ada Cole Memorial Stables before their merger with Redwings in 2005.

Tequila came into Ada Cole's care in 1986 when his owner was evicted from their livery stables. With no one to turn to for help, his owner approached the PDSA, who then rang Ada Cole for help.

Over his time in his Guardian home he has been ridden by both Carol and her granddaughters. She admits he could be an excitable ride, saying, “Show him a jump and he would ‘dance’ in excitement, but when he was being led with a nervous child on board he was always as good as gold."

Now he enjoys a lovely retirement at home with his companion Rocky, and Carol credits Tequila’s influence for making Rocky a much more laid back boy and happier to be handled.

Preferring to live out in his paddock, he spends most of his time out in his field, but comes in for his tasty meals twice a day and to have a groom and a catch-up with with Carol. 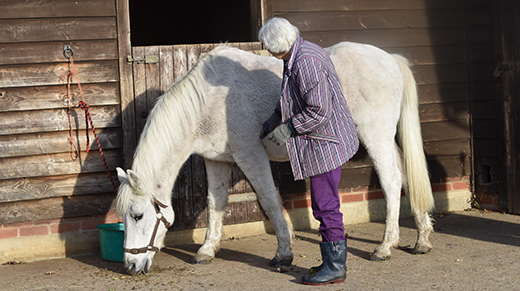 Redwings Tequila Sunrise enjoys a pamper in his retirement!

Being a gentleman of advancing years, Tequila now has to have medication for Cushing’s Disease but Carol has invented a sneaky way for him to take his medicine and receive a treat at the same time - a hollow carrot with his tablet inside does just the trick!

She said: “He seems so well in himself and is still full of character. We’ve enjoyed him all these years and he has a home for life with us. We’ll be here for as long as he is!”

If you think you could offer a loving home to a rescued horse, then please click here.