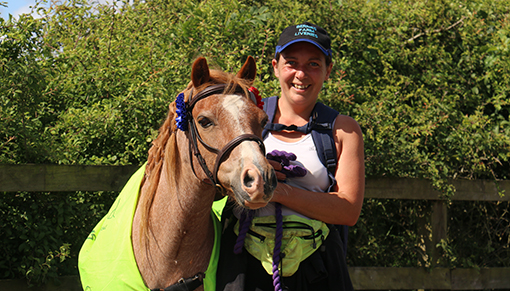 Like many of us, Redwings Smartie and his Guardian Jen decided that lockdown would be the perfect time to dust off their running shoes (or hooves!) in a bid to get fitter, before being inspired to raise money for a very important cause.

Jen has been Smartie’s Guardian since 2011, when she rehomed him as a companion for her late mare Tottie. Smartie and Jen’s daughter Jessica became firm friends and their partnership helped her overcome some challenges in a difficult period of her life. Though Jessica is now grown up, Smartie remains with Jen and has helped other children regain their confidence through equine assisted learning sessions. Smartie, a 16-year-old Welsh Section A pony, was originally one of 13 ponies rescued by the RSPCA, and later offered a home by Redwings, from a farm in Wales where they were discovered in an emaciated state.

Now, Smartie is offering people a helping hoof through a fantastic fundraising effort as Jen explained:  “The idea came about when I started the Couch to 5k running programme, and I saw it as an opportunity for Smartie to get fitter too. I decided to raise money for Mind after Smartie helped Jessica so much with her mental health. Plus, with the coronavirus pandemic seeing a surge in the need for mental health support, it seemed fitting. I set us the challenge of running 84km (the length of two marathons) in six weeks and a fundraising goal of £150."

Redwings Smartie and Jennie for blog.jpg 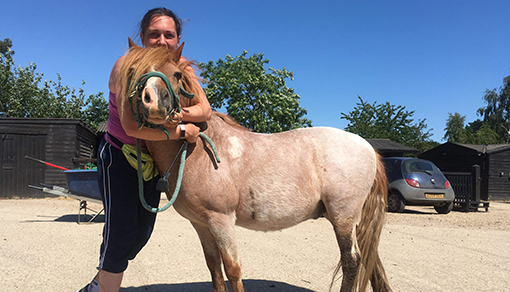 On Sunday 28th June, Smartie and Jen finished their challenge with a 9km run which ended outside Redwings Aylsham as a very special tribute to him being a Redwings pony. Smartie was even wearing his rosette which he recently won in the Best Friends Class in the Redwings Show Online.

Jen said: “Running has always been a way of reducing my own stress levels and to have Smartie, my very special friend, beside me is magical. We get to chat everyday and I always remind him of the memories he has created. He has definitely benefited physically from the challenge and is much fitter for it, so much so that in our later runs I would slow down to give him a break from trotting and he would give me a nudge as if to be like 'Come on, let’s keep going!'

“We have had a few strange looks from people who aren’t used to seeing people running with a pony and he is the only pony that we know of in the Couch to 5K group on Facebook, so he may be one of the first ponies to complete the programme! We have had a fantastic time and may look to make it an annual challenge and see if we can recruit some friends (with two legs and four!) to join in with us. We have also smashed our fundraising target and raised £240 for Mind.”

Rachel Angell, Head of Norfolk Equine Operations, who oversees our rehoming programme, said: “We’re very proud of this super pair! Whilst Smartie is not being ridden at the moment, this is a fantastic way to keep him fit and healthy and most importantly for him to have some fun with his Guardian! The fact that they have raised such a great total for a very worthy cause is just the icing on the cake!”