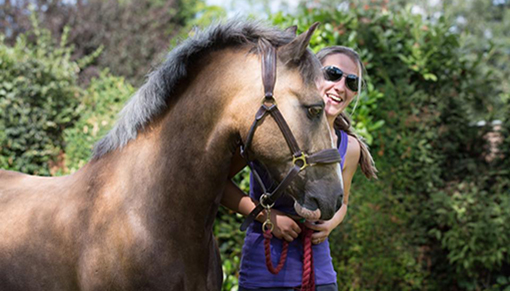 Redwings Puck was rehomed with his Guardian Victoria in 2015. Almost three years later, Puck has even been lucky enough to head off with his new family on his horsey holidays!

Welsh Cross Puck was one of many feral ponies Redwings rescued from the Welsh commons in 2004. The ponies had been left to roam with little intervention from their owners, and had bred indiscriminately. The resulting overpopulation meant there was not enough grazing to feed them all. They were also unhandled and very nervous meaning basic veterinary care and farriery were not being provided, so Redwings intervened to ensure they got the care and rehabilitation they needed. 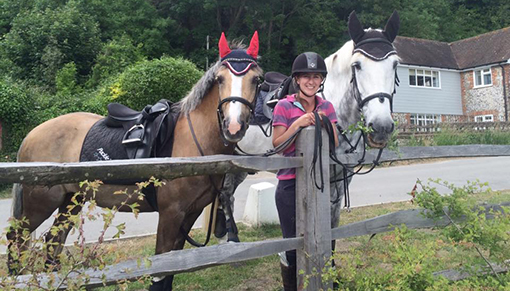 Having undergone training, Puck proved to be an excellent candidate for our Redwings Guardianship Scheme as a ridden pony, with a love for jumping. And it wasn’t long before he was spotted on our website by his now-Guardian Victoria:

“I was looking for a ridden companion for our other horse Johnny,” explained Victoria. “I wanted to rehome a Redwings pony because I had been a supporter since I was a child and a member of the Redwings Adoption Scheme – I remember getting all of the Adoption gifts!

“When I saw Puck, he looked perfect so made an application, but I couldn’t wait so I called straight away too!

“My first thoughts when meeting Puck were that he seemed cheeky, but the advantage of rehoming him from Redwings was that the team were able to give us a really honest account of his quirks, likes and dislikes, and I knew I would have their support if I had any questions. We had a little jump in my ridden trial and I was so excited when it came to taking him home!” 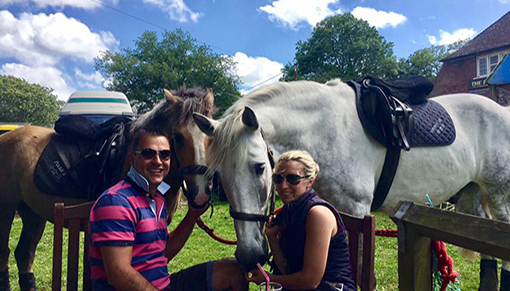 We asked Victoria what the best thing was about being Puck’s Guardian: “Everything! He took a while to settle with us, like most new ponies, but his trust came day-by-day and now time with him is so rewarding. I am reliving my youth on a fun pony who is not only awesome to ride but is a great companion for our other horse Johnny!

“We have all sorts of adventures together. Puckles (as we now call him!) enjoys dressage, and he is a really quick learner. But, he also really enjoys going for a blast! We have also started taking him on holidays with us. My husband Greg and I hire a cottage with grazing, and we absolutely love being able to walk up to the horses in the garden. We ride most days, whether that be to local pubs or to the beach. The boys love us all being together like that, and they never put a foot wrong!

“We are taking Puckles on holiday again this year to celebrate my 30th birthday because he is such a massive part of our family now, all thanks to Redwings!”