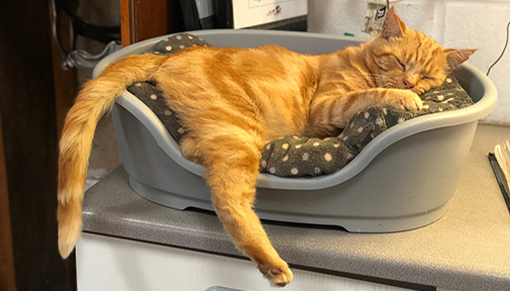 Allow us to introduce you to one of Redwings' newest residents, although he isn’t quite what you might expect to find settling into a new life at a horse sanctuary! Meet Peter!

Earlier this year a skinny ginger cat started hanging around at the yard belonging to the neighbour of our Chief Executive Lynn. He appeared to be a stray but after taking him to the vet to be neutered it was discovered that he had a microchip which led to the discovery that he had run away from his owners as a kitten and was in fact seven years old!

Quite where he had been for the last six years remains a mystery and as his original family have since moved away, he had no home to return to.

Unfortunately, as he didn’t get on very well with the other cats on the yard, staying there wasn’t really going to be possible for him either... but the story doesn’t end there.

It had been a couple of years since Charlie, the cat who lived at our HQ in Norfolk, had sadly passed away so Lynn wondered if this could become the perfect home for the newly named Peter!

Fast forward a few months and not only has Peter settled into life at our Horse Hospital extremely well, but it appears he has most of the vet team wrapped around his fluffy ginger paw!

Redwings vet Rachael took care of him when he first arrived and made sure he received a thorough check up, as well as worming and flea treatments.  Luckily, he was as fit as a fiddle apart from being underweight due to his time on the street, however as you can see now, with the help of his personal nurse Meg, he’s put on all the weight he needed.

Rachael reports that he is a firm favourite of the vet team and has been a big boost to morale for everyone during this very challenging year. Senior Veterinary Surgeon Nicky Jarvis added,“Peter is quite the diva and thinks he owns the vet unit!”

It’s safe to say that this adorable ginger chap has warmed the hearts of all who have met him so far at Redwings, and we’re sure reading his story and seeing how well he’s settled into life amongst humans, horses and donkeys after being homeless for so many years will warm yours too!