Moses becomes a star for Spillers 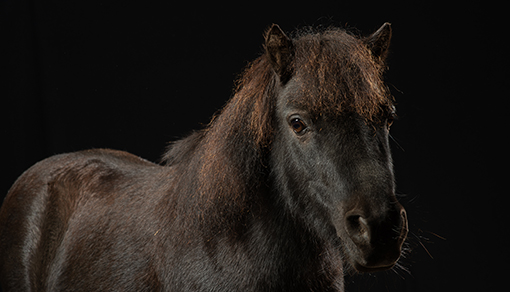 Redwings resident Moses, a miniature Shetland, has become the famous face of Spillers and their HAPPY HOOF horse food.

We had worked with Spillers previously on an educational film for horse owners, so when they were on the look-out for a new model they thought of us, and we knew that handsome Moses was just the man for the job!

Moses was born at Redwings after his mum, Ruth, was rescued in 2004 from common land in Lincolnshire. She was one of over 70 ponies who were living in semi-feral herds with no human intervention or basic care. Sadly, because of this many of the ponies had very overgrown feet and high worm burdens, as well as several having deformities due to indiscriminate breeding, which required specialist veterinary care.

Working with other organisations on their rescue, Redwings offered a home to 49 of the ponies. They had naturally been living in three separate herds so we named them on three themes: cheese (with ponies called Edam, Stilton and Cheddar), biblical characters, and curries (including Moses’ best friend Dhansak!)

Lots of the group went on to be happily rehomed, but Moses has an extra special job at the Sanctuary and is one of our small team of education ponies. If you have ever visited the Redwings stand at the Royal Norfolk Show or other events, then you may have met this special chap and Dhansak. Their calm and friendly natures have made them invaluable at helping us engage with people about our work and educating the public all about horse welfare.

His laid-back nature also made him the perfect candidate for when the Spillers team came to Redwings with a professional photographer to turn him into a modelling superstar! His carers gave him a wonderful groom and took him on a tour of the studio which had been set up in one of our barns so he could get used to the lights and camera. Moses was a true professional and didn’t bat an eyelid; he thoroughly enjoyed his moment in the spotlight!

We were so pleased to work with Spillers and proud Moses will be appearing on HAPPY HOOF packaging and promotion across the UK - what a superstar!