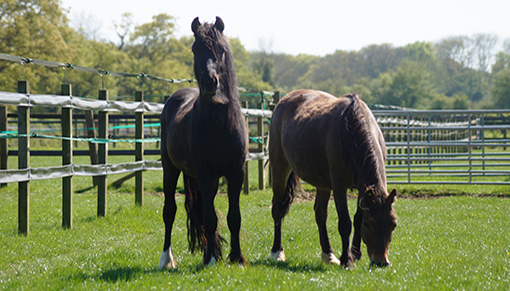 It’s been one year since the former owner of emaciated mare Bella and her foal Charlie was prosecuted for neglect having been kept in a dark barn for more than 18 months.

The pair are going from strength to strength, having made new friends and learning to be handled for the first time!

On 1st March 2017, Frederick Stannard received a lifetime ban on owning all animals having pleaded guilty to four offences under the Animal Welfare Act 2006.

When attending the barn, they found then 20-year-old bay Welsh Cross mare Bella and her yearling Charlie.

Bella had been shut in the barn for more than 18 months, which had very little ventilation and was strewn with rubbish. Both were emaciated, suffering from overgrown feet and were covered in lice. They were also completely unhandled and extremely fearful. 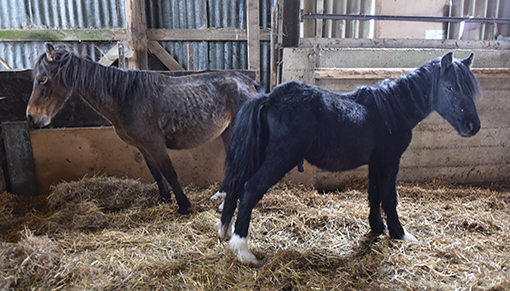 Bella and Charlie when they were rescued

After their rescue, they were brought back to the Sanctuary where they underwent extensive veterinary and farriery treatment before moving to Redwings' dedicated Behaviour Centre in May 2017.

Since their arrival at the Behaviour Centre, Bella and Charlie have settled into a new herd and are slowly learning to trust humans.

Sarah Hallsworth, Equine Behaviour Manager, said: “They’re both very much enjoying life in their field and they’ve settled well into their new group of friends. It’s wonderful to see them looking so happy and healthy.

“Because of their previous ordeal, they’re still very timid around humans and it will take a long time before we earn their trust. They still run away from us when we enter their field to poo pick or drop off their breakfast, but instead of running all the way to the end of the field like they used to, they will simply take a few strides and watch us, which is progress.

“Charlie, in particular, is coming on quite well with his training. He is allowing his trainer to touch him for the first time and we’re now introducing him to a head collar. For a horse that was so fearful, this is great to see and will help him feel more comfortable with future routine health and farriery visits.” 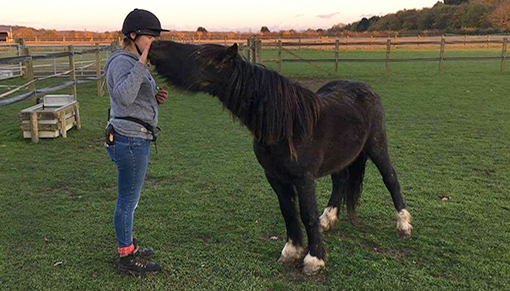 Charlie is letting his trainer touch him for the first time

Redwings is 100% publicly funded charity and it is thanks to your support that we are able to offer Bella and Charlie a safe and happy forever home. Just £5 could help fund a rehabilitation session with a Redwings behaviourist for nervous horses, like Bella and Charlie, so if you’ve been touched by their story, please give whatever you can below. Thank you.