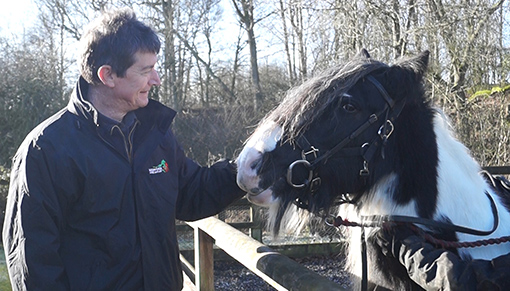 Find out more about our Head of Welfare & Behaviour, Nic de Brauwere MRCVS

Nic graduated as a veterinary surgeon in 1991 from Onderstepoort in South Africa. He has worked at Redwings Horse Sanctuary for more than 27 years providing clinical services, herd health management and equine welfare case work both to facilitate rescue and alleviate the need for it.

As Head of Welfare and Behaviour at Redwings, Nic leads a team that has specialised in the rescue, rehabilitation and long-term care of feral, unhandled or mistreated horses for more than a decade and this extensive experience has fundamentally informed the charity’s approach not only to equine health and welfare but equine behaviour and training too.

In particular, Nic’s extensive experience working in the field of equine welfare led to his appointment as the Chairman of the National Equine Welfare Council in 2009, an umbrella organisation for equine rescue centres and sanctuaries across the UK.

Nic has been involved in consultations on many areas of animal welfare policy; most notably in this context he worked with the Welsh Government between 2012 and 2014 to assist them in drafting the Control of Horses (Wales) Act, which became law in Wales in 2014 and helped energise the commitment to an English equivalent that came into force the following year.

He’s a recognized expert in the infectious disease Strangles, presenting at the Havemeyer International workshops on the disease in 2019 as well as teaching vets in the UK.