Robbyn and Ghost are magical fundraisers 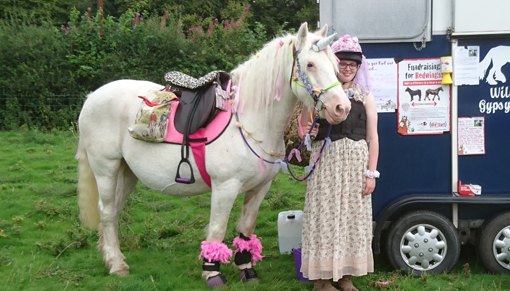 It’s not every day you see a unicorn and a fairy riding across the Welsh countryside!

Redwings supporter Robbyn Wilmot and her Gypsy cob Ghost dressed as magical creatures to raise a magical amount of £100 in support of our rescued horses, ponies, donkeys and mules.

The pair donned their colourful outfits and undertook a 12-mile sponsored ride near the village of Llanwrthwl, Powys, in September.

The ride was organised by Llanwrthwl Hunt as a fun ride for local horse owners, but Robbyn decided to go one step further and use it as an opportunity to raise money for Redwings Horse Sanctuary and Wales Air Ambulance.

Robbyn said she was inspired to complete the ride in fancy dress because of Ghost’s beautiful light colouring and her laid back nature, which meant she didn’t mind wearing a unicorn horn!

“I chose to ride for Redwings Horse Sanctuary because you rely solely on donations and you wouldn’t be running without people fundraising for you,” Robbyn added.

Robbyn’s fundraising efforts could pay for enough hay to feed six horses for a month or cover the cost of veterinary health checks for two newly rescued horses, which is amazing support!

If you’ve been inspired by Robbyn and Ghost to raise funds for Redwings, then let us know all about it! Get in touch by clicking here!