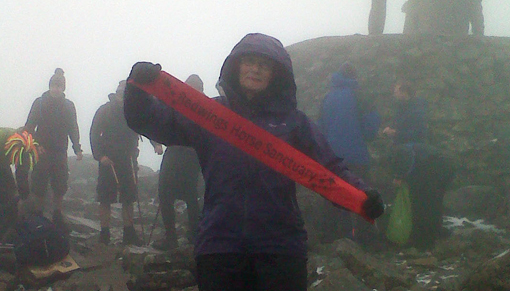 We’d like to say a big thank you to Janet Wright, a member of our visitor centre team at Redwings Ada Cole in Essex, who has scaled new heights in her efforts to raise funds for our rescued horses and donkeys.

In July, Janet climbed Ben Nevis in Scotland – the highest mountain in the British Isles – and raised £535!

The 1,345m climb took four-and-a-half hours to complete and there was even snow at the top.

Janet said: “For me, it was a personal challenge but I thought it would also be a great opportunity to raise money for Redwings, to promote the charity and inspire others. If I can climb a mountain then someone else can too!”

Janet has been a permanent member of the Redwings Ada Cole team for about six years and has previously raised money for us with sponsored runs and swims.

She added: “I love working for Redwings. Working at the visitor centre, I get to see what it’s all about and just how hard everyone works to give a happy life to the horses.”

If you’ve been inspired by Janet to take on your own fundraising challenge for Redwings, then please let us know! Get in touch by clicking here.