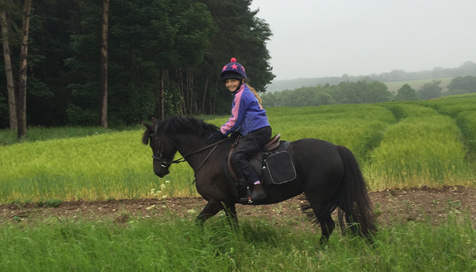 Cold temperatures and constant drizzle couldn’t deter one young Redwings fundraiser who rode the full length of the Peddars Way trail, in Norfolk.

Determined Elise Barber, who is just eight years old, and plucky Welsh Mountain pony Star completed the whopping 47 mile ride over three days in May and raised around £450!

Elise, who has been riding since she was five, said: “I wanted to have a challenge over the half term holiday. I ride along the Peddars Way sometimes because it’s on our doorstep and I wanted to try to ride the whole way.”

The Peddars Way trail runs from Knettishall Heath, near Thetford, to the Norfolk coast close to Hunstanton.

Elise’s mum, Pip Barber, who accompanied her along the route, said: “We had a wonderful time on the Peddars Way and the weather didn’t even dampen our spirits! It was cold and drizzly on all three days, but Star was amazing and seemed to love every minute. Elise didn’t complain once and there were several challenges on route I can assure you!”

Challenges along the way included Elise and Star having to think on their hooves and find a new route when the footpath was blocked by a fallen tree!

Well done to Elise for being such a fantastic Redwings fundraiser!

Are you thinking of taking on a personal challenge for Redwings? Then we’d love to hear from you! Get in touch here. And don’t forget to enter our Young Redwings Fundraiser of the Year competition for supporters under 16 years old – click here for details.