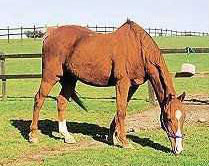 Sam was a striking chestnut Thoroughbred Cross who arrived at Redwings in 1998. Unfortunately Sam had an incredibly dipped back which meant that he was unsuitable as a ridden horse. But luckily for him we were unable to refuse such a handsome chap, so we offered Sam a permanent home at Redwings! He became an adored member of Redwings Adoption Club and spent his days meeting and greeting his visitors at Redwings Caldecott Visitor Centre. Sam was a true star and even appeared on an episode of Pet Rescue!

During his time at Redwings, Sam sadly developed a painful disease which affects a horse’s lower legs, called Mud Fever. Redwings Vets nursed and treated Sam’s mud fever, but Mud Fever is incredibly difficult to treat and so his condition didn’t improve as much as we had hoped. Sam also developed arthritis which caused him a lot of discomfort, so it was decided that the only way to prevent his suffering was to put him to sleep. Sam was a true sweetheart and he is greatly missed by many.