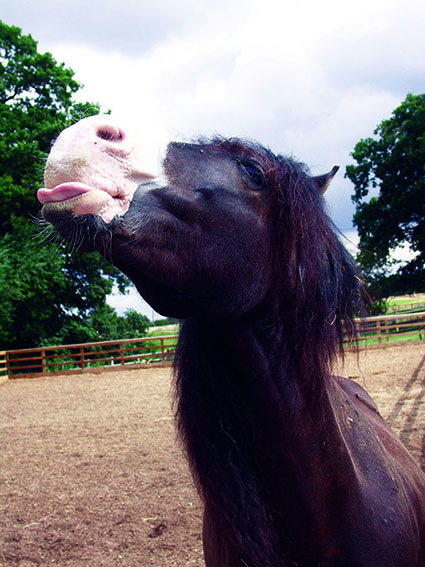 Rhadlon was a wonderfully charismatic pony. He was rescued from appalling neglect in 2002 after being shut in stable for four years. The stable had never been cleaned out so Rhadlon was standing on years’ worth of solid muck.

Rhadlon was underweight, suffering from muscle wastage and had horribly overgrown and rotting hooves.

Despite the prolonged misery Rhadlon had endured, in the caring hands of our team he soon blossomed into a happy, handsome chap who just loved sticking his tongue out! Entertaining as it was to see Rhadlon in action, we knew his funny ways were almost certainly habits he had learnt to help pass the endless days in confinement.

Thanks to Redwings, for 12 happy years Rhadlon enjoyed the freedom to exercise, graze and always be in the company of other horses. He was a real favourite with staff and visitors to Redwings Ada Cole.

Very sadly, we lost Rhadlon in 2014 when he suffered a serious illness called colic. He was 25 years old and even as an elderly pony he had still been winning the hearts and putting a smile on the faces of everyone who met him.