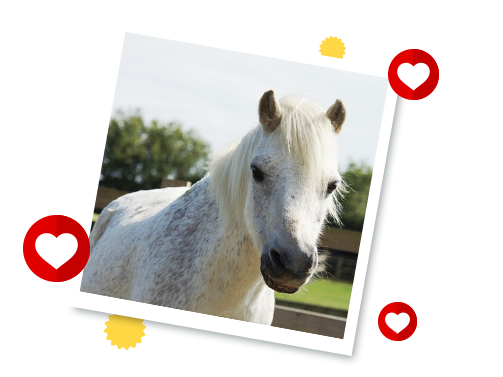 Oliver Twist arrived at Redwings in 1997, after he was rescued from a horse sale in Nottingham by a Redwings supporter. Oliver had a condition called a “wry” nose, which meant his face was slightly twisted - hence his name! This condition never seemed to bother him, but he was unable to wear a bit and bridle so he could not be ridden, which sadly meant he was at huge risk of being sold for slaughter.

This cheeky pony moved to our Caldecott visitor centre in Norfolk when it opened in 1999, and had lived there ever since. He also stole the hearts of many supporters during the 17 years he served as an Adoption Star, with the last four years spent as a retiree.

In 2018, while still in reasonable health for his age, Oliver suffered a very sudden and severe seizure which he failed to recover from and Redwings’ vets had to make the heart-breaking decision to put him to sleep. He was 26 years old.

We’ll never forget this handsome and friendly chap, and we're so thankful for the support of his adopters which allowed us to give him a full and happy life at Redwings.