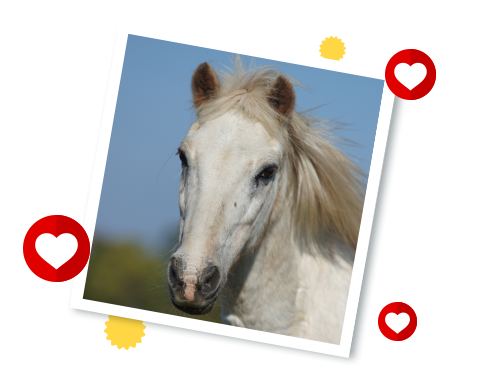 Icky arrived at Redwings in 1991 after being rescued from a horse sale where he was destined for slaughter. His real name was Haw Idris, a special name given to him when he was born and registered with the Spotted Pony Society.

Despite his sought-after status, Icky was discovered extremely thin, with a severe worm burden and terrified of people. But thanks to specialist and sympathetic behaviour training from his carers at Redwings, Icky soon overcame his fears. His friendly and loving manner (and famous strawberry blonde beard and tail) made him a huge hit with visitors to the Sanctuary and he quickly became a Redwings Adoption Star!

Icky moved to our Caldecott Visitor Centre when it opened in 1999, and had lived there ever since. He stole the hearts of many supporters during the man years he served as an Adoption Star, with the last four years spent as a retiree.

Sadly, Icky was put to sleep in 2018 after suffering recurring bouts of colic linked to issues with his small intestine that meant he was unable to absorb glucose and nutrients efficiently. He was 30-years-old.

We’ll never forget this handsome and friendly chap, and we know you won’t either. RIP Icky.