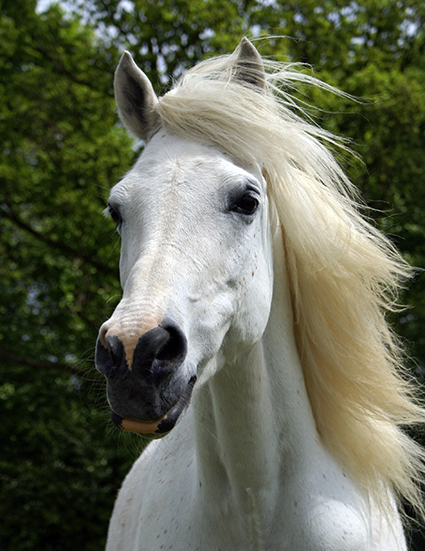 Beautiful Boo was an elegant Arab horse who was rescued in 2002. He was one of six horses who were found in terrible condition by the RSPCA and brought into the Ada Cole Memorial Stables to receive the care they badly needed. Boo’s owner was prosecuted and banned for life from keeping any more horses.

Although he was only eight years old when he arrived, Boo was quite nervous after his ordeal and not suitable for rehoming. He was happiest living in a familiar environment with his horsey friends and being adored by the Ada Cole staff and visitors!

Arabs are very beautiful, with their dished faces, athletic bodies and expressive tail which is held high in the air when they get excited! But it was not only his handsome looks that made Boo such a popular addition to the adoption scheme, he also had a lovely nature and liked a bit of fuss when he wasn’t feeling shy.

We sadly lost Boo in 2011 when he was diagnosed with kidney failure. He had enjoyed nine happy years with the Ada Cole team and Boo is still very much missed by the staff and his many faithful supporters.