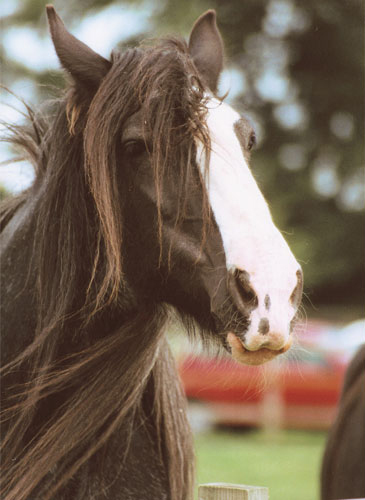 Adoption star Bonnie was a beautiful black Shire, who stood at 17hh with a small white patch on her tummy. She arrived at Redwings in 1989 along with her beautiful mother, Jessie, who was also on our adoption scheme. Jessie was rescued from what would’ve been a tragic fate and was offered a permanent home at Redwings with her daughter. When Bonnie was a little older and had fully settled into her new home at our Sanctuary, she became a member of Redwings Adoption Club, along with many other equines who had been chosen specially. Bonnie was a perfect Adoption star because she loved the fuss and attention that came with the role! Sadly in 2005 Bonnie was put to sleep at the age of twenty due to her suffering of arthritis, a condition which is very common in older equines.  Bonnie was a true gentle giant who had many treasured fans and she’s deeply missed by all who knew her, but thankfully she is free from pain and discomfort.