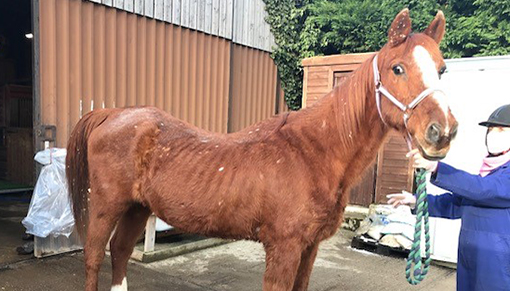 On Friday 8th January, one of our field officers with the support of the RSPCA transported an emaciated horse to the Sanctuary who had been left without basic care.

The handsome 16 year old Thoroughbred, named Zac, was discovered living in a field in Norfolk covered in thick ankle-deep mud with no shelter or access to grass, forage or water.

He was also assessed to have a Body Condition Score of 0.5 out of 5 (an ideal score is 3) and was teeming with lice. 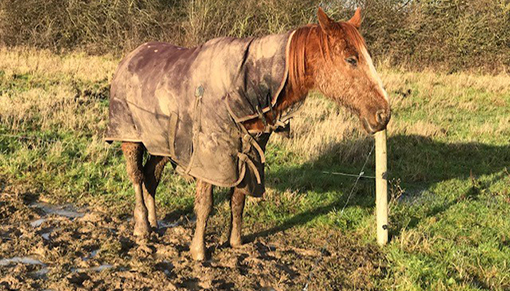 Zac pictured in his paddock before he was taken to Redwings.

Following a call from a concerned member of the public, our Senior Field Officer Julie Harding initially attended the site on Thursday 7th January and an RSPCA officer left a notice for Zac’s owner to move the horse onto a suitable paddock within 24 hours.

Upon returning to the field the next day and meeting the owner, it was clear that no provisions to move Zac to an appropriate location or provide him with food or water had been made.

Realising they were unable to give Zac the care he desperately needed, the owner agreed to sign over his ownership to Redwings and he was immediately taken to the Sanctuary. 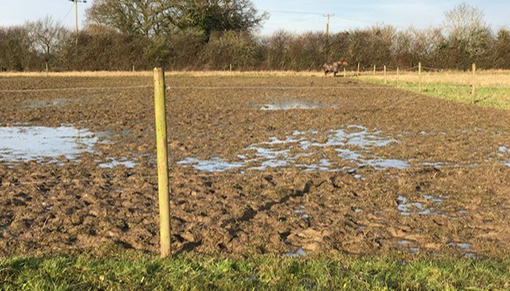 Zac's paddock was covered in thick mud with no grass.

Zac is currently undergoing veterinary assessments, so we’re still to determine the full extent of his health issues, but he has so far settled well into his new surroundings and is enjoying all the attention he is receiving from his carers.

Julie said: “Zac’s field was covered in such thick mud that trying to walk over to him to assess him was a struggle. There was no evidence of food, forage or water, and feeling under his rug it was obvious he was extremely underweight. As soon as we moved him onto grass, he barely came up for air he was that hungry.

“Our priority now is to help him regain weight. Despite what he’s been through, he’s very sweet and appears quite bright. We have all our fingers crossed he’ll be able to make a full recovery but it’s still early days.

“Sadly Zac is an example of a horse we often see at the Sanctuary. If he had just been provided with basic care, he would never have fallen into such a state. His owner realised they were no longer able to keep up with their responsibilities and agreed to sign Zac over to us. We would urge anyone who is struggling to provide for their horse to seek help immediately, and if you’re looking to take on a horse please think very carefully about the care you can provide before making that commitment.”

Last year we gave a safe home to nearly 180 horses and donkeys in need, just like Zac. If you’d like to support his specialist care and that of our new arrivals throughout 2020, you can donate by texting REDWINGS 20 to 70085 (texts cost the donation amount plus a standard rate message), call 01508 481000 or click here for further details.