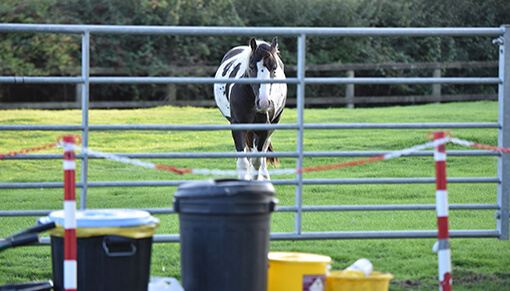 Redwings has partnered with the British Horse Society in releasing a new edition of the Strategy to Eradicate and Prevent Strangles (STEPS).

The widely used strategy provides crucial guidance on how to minimise the risk of spreading this potentially life-threatening disease and educates horse owners on recognising the signs of strangles in their horses.

The updated strategy has been published ahead of Strangles Awareness Week, 3rd - 9th May 2021, which aims to create awareness and challenge stigma of the extremely contagious disease.

Strangles is a highly infectious and painful disease caused by the bacterium Streptococcus equi, in which swollen and infected glands of the head and neck area can lead to abscesses that make swallowing and even breathing difficult. This is not only extremely distressing for the horse but in severe cases, it can be fatal.

The latest version of the STEPS was created in partnership with Redwings, Scotland’s Rural College (SRUC), Surveillance of Equine Strangles, Dr Andrew Waller formerly of The Animal Health Trust, and BHS Scotland. It provides invaluable information which can be used by vets, horse owners, yard managers and other organisations to detect and prevent the spread of the disease.

Helene Mauchlen, BHS National Manager for Scotland and project lead in the creation of the first edition of STEPS, said: “It is very heartening to see a third edition of STEPS clearly setting out eight things we all can do to help eradicate and prevent strangles and counteract the stigma that is so often associated with this grim and persistent disease. STEPS, with its simple traffic light system, is still the most widely used method of controlling strangles on a yard. Used globally as an effective way of stopping strangles from spreading, its common sense and practical approach can be used by everybody.”

Around 10% of horses that recover from strangles become persistently infected carriers of S. equi, even though they appear healthy, posing a major risk to other horses and potentially triggering an outbreak. The STEPS guide gives horse owners a clear traffic-light system to follow in the event of an outbreak, advising on how to manage horses into groups and minimise the risk of transmission to other horses on the yard and the surrounding area.

STEPS also provides important guidance on how to spot the clinical signs of the disease, which include: