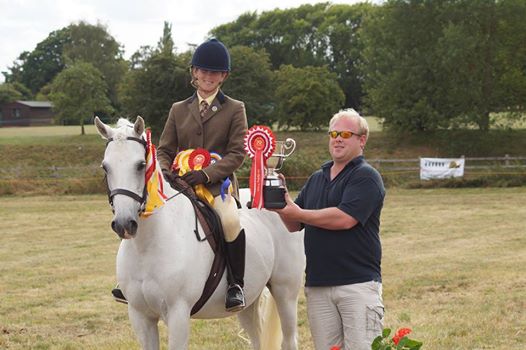 In July 2014, Redwings Noel, a 17-year-old grey Welsh X Arab, and his rider Guardian Hayley Ward went Supreme at the 70th anniversary Kimpton Horse Show. The title was the most recent in a string of successes since Noel was rehomed by Redwings Ada Cole in 2003.

Noel’s show success is remarkable as his start in life was very troubled. He was rescued by Ada Cole Memorial Stables (as it was known before merging with Redwings in 2005) in 1998 as a two-year-old, along with his companion Mistletoe.

Both horses were found abandoned and in very poor condition having been left to fend for themselves while their owner was in prison. When signed over into the care of the Sanctuary, it was decided that Noel would be happiest as part of a loving, active family.

Hayley became Noel’s Guardian when he was five years old and soon they were jumping and competing together, with their first success at a show Ada Cole Memorial Stables then ran. It was the start of a succession of competition wins.

“He is one in a million”, said Hayley. “I can’t describe the pleasure I have loaning this cheeky little lad. We know each other inside out and have an unbreakable bond.

“To win the Supreme at the Kimpton Horse Show was incredible. I would like to give a huge thank you to Redwings Ada Cole for giving me the opportunity to take on such a smashing pony – especially one they worked so hard to save and care for”.