British horses get a shot at Hollywood stardom! 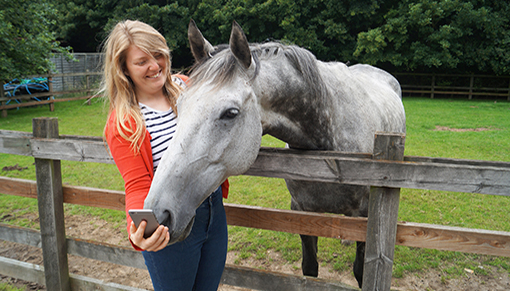 Redwings has partnered with Equilab - an app and social network for equestians - to help increase the diversity of horse noises heard in Hollywood films.

Users are invited to submit a short recording of their horse for the chance for it to be added to the world-famous film music and sound library, curated by De Wolfe Music, who has worked on blockbusters such as Brokeback Mountain, American Gangster and Dawn of the Dead.

We're supporting the initiative by joining a judging panel, consisting of Adam Torkelsson, CEO and co-founder of Equilab, Janine De Wolfe, Director of De Wolfe SFX, and Nic de Brauwere, Redwings' Head of Welfare and Behaviour, to decide which real horse noise should be submitted to the library.

Equestrians wanting to submit their horse's sound effect can find out how to download the Equilab app here - https://equilab.horse/hollywood_stardom

Nic de Brauwere said: “Horses use a variety of noises, such as nickering, snorting and sighing, which - when combined with body language - communicate a wide range of emotions. However, when it comes to the big screen, an image of a horse is usually only accompanied by a classic neighing sound and often in situations where the horse would be unlikely to make that noise anyway.

"At the Sanctuary, we observe the many ways horses communicate between themselves and with humans on a daily basis, so we’re really pleased to join this project and to highlight, especially to Hollywood, that there’s a much richer selection of noises out there to help provide a more realistic portrayal of our four-legged friends.”

Adam Torkelsson added: “Horses are creatures of immense personality and intelligence. We are delighted to be both contributing to a greater depth and variety of horse noises in film, while also celebrating a brilliant gem of movie lore. Through De Wolfe’s legendary archive, we can now give a horse the chance at movie stardom, and add to the diversity of equine voice acting in Hollywood.”

Meanwhile, Janine De Wolfe, commented: “The De Wolfe sound effects library is delighted to be associated with Redwings Horse Sanctuary and Equilab.  We look forward to listening to the high-quality sound recordings of horses that will be submitted, and in choosing a winner to add to our SFX library collection.”

We look forward to hearing all of the recordings!