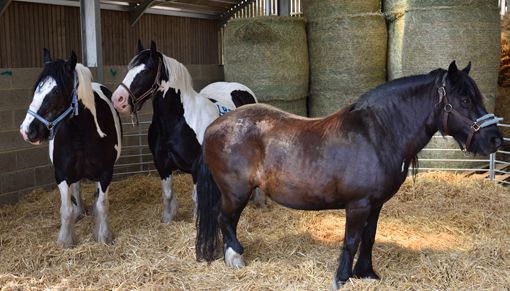 On Wednesday 21st June, three cob mares were rescued from Harlow Common, as part of an ongoing joint operation by Redwings, the RSPCA and the local council to help ensure the welfare of equines at the location.

The mares have been named Arcadia, Glade and Flix by our team after stages at Glastonbury Festival as they were rescued on the first day of the world renowned event.

The horses were found running loose on Latton Common and posed a real threat to themselves and the public with the possibility of them straying onto the nearby motorway.

Once rounded-up, the horses were examined by our Head of Welfare & Behaviour and vet Nic de Brauwere. All three were found to be obese; two were in considerable discomfort with laminitis requiring pain relief. They were all subsequently removed on welfare grounds and are now in Redwings’ care, while an investigation is carried out.

The operation also saw two further horses found running loose on Potters Street Common rounded up and examined by Nic. During his assessment, however, an owner came forward and so was given advice regarding weight management and hoof care.

Reflecting on the operation, Nic said: “The challenge faced on the commons in Harlow is two-fold. Firstly, the lack of management of the land to determine who has a right to graze there, and secondly, the lack of formal identification and traceability of some of the animals and their owners.

“The welfare charities have worked with responsible owners to ensure horses are correctly identified, which aids our ability to offer advice and guidance in their horses’ care and management when/if needed. But, we still need all horses to be identified, which is why we’re calling for a functioning equine database and enforcement of passporting and microchipping legislation by the authorities so that we can begin to hold irresponsible owners to account and to deter others from using common land as an opportunity to fly-graze or to abandon unwanted horses.

“Welfare charities and local authorities are increasingly being called upon to intervene in these issues, but the onus also needs to be placed on owner responsibility. Therefore, effective equine identification is something we are campaigning for and something we believe is of utmost importance to securing the lives of horses at risk.” 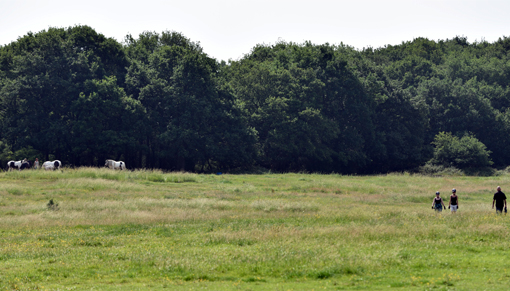 RSPCA Chief Inspector Sam Garvey, said: “The welfare of horses on Harlow Common is an emotive issue for the public and all the agencies involved.

“We are grateful to those who are worried for the welfare of these horses and take the time to contact us.

“But the reality is we don’t have special powers to remove animals from their owners just because we don’t like how they keep them. We have to operate within the law, and it is about balancing the needs of the animals with the rights of the owners to give them a chance to put matters right, before their animals are removed. If an animal is suffering then we will call a vet for their expert opinion and if they are proven to be suffering then they can be removed by the police who can legally remove them and then place them into our care.

“We also hold monthly meetings with the council, police and other equine welfare charities  to discuss what is happening at the common, and, if like in this instance an issue arises in which a joint operation is required, then we will act.”

Redwings is a 100% publicly funded charity, if you would like to help support our work so we can continue to help horses in need like Arcadia, Glade and Flix please donate below. Thank you.

Help us continue to rescue horses like Arcadia, Glade and Flix

Our Spring 2021 newsletter is out now!