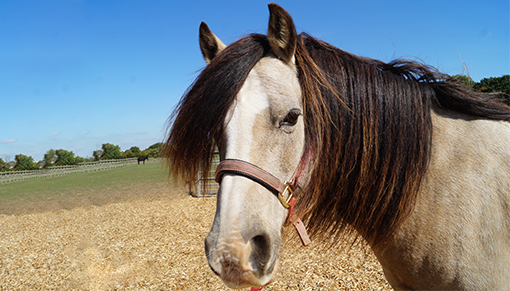 Rockstar pony Elvis will be celebrating his 13th birthday with a party at Redwings Ada Cole on Sunday 7th July – and everyone’s invited to join in the fun!

Kicking off at 11:30am, Elvis will be treated to a special groom before meeting his fans during his parade. Finally he’ll get to tuck into his very own cake – fit for a king! Party-goers will also be able to join in with an array of Elvis-themed fun, including a quiz trail, so this is one party not to be missed!

Handsome Welsh pony Elvis, famed for his striking colouring and legendary rock star quiff, arrived at Redwings in 2011 alongside his best mates, Presley and Tennessee! The gang were part of a large group of malnourished ponies from Wales taken into the Sanctuary after their elderly owner was unable to look after them properly.

After giving the birthday boy plenty of fuss, why not take a stroll and meet some of the other adorable rescued residents who we know would also love a cuddle?

Then be sure to visit our cafe for a refreshing drink and a tasty snack, plus our on-site gift shop has a wide range of souvenirs on offer so you can take home a keepsake from your day. Profits from all purchases go towards the care of the 1,500 rescued horses, ponies, donkeys and mules living at Redwings nationwide.

We hope you can make it!