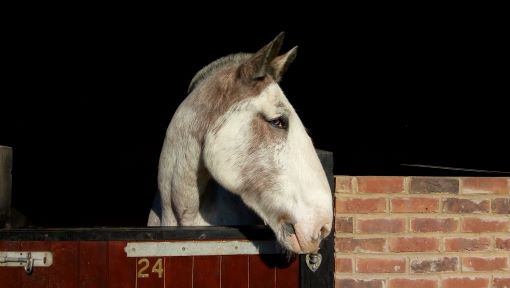 An animated film that tells the story of one of our most beloved horses, Boo, who passed away just before Christmas, is in the running for a prestigious Charity Film Award.

‘A Second Chance for Boo’ tells the tale of how the blind Clydesdale came into the care of Redwings having lost the sight in one eye to cancer and being cruelly shot in the other.

After this terrible incident, his owners reached out to us and asked for our help and, after gently and carefully earning his trust, Boo went on to live a happy life with his horse and human friends at our Hapton headquarters for 12 years.

Very sadly Boo, who was 24, had to be put to sleep just before Christmas when it no longer became possible to manage lameness issues alongside the arthritis in his legs.

Lynn Cutress, our Chief Executive, said: “We loved Boo so much here at Redwings, and we know our supporters did too.

“To find out that our film about Boo, which was made back in 2020 to help raise funds, has been shortlisted for a Charity Film Award seems quite poetic, just a few weeks after we had to say goodbye to him.

“Thank you so much to everyone who voted.”

The film was narrated by Norfolk-born actor and writer Stephen Fry and produced by Norwich-based company Immersive Studios.

Niky Ellison, Marketing Manager of Immersive Studios, said: "It was a genuine pleasure to work with the team at Redwings to bring Boo's story to the people, working with such a wonderful charity and one so close to home was a real highlight for us. Using animation allowed us to give Boo's story the gravity it needed without showing the grim reality of some of the details. That, twinned with Stephen Fry's narration, makes for a really wonderful film that shows just how much good the team at Redwings do."

The awards celebrate the use of film by the third sector to change mindsets and raise awareness of good causes and the work they do. They are organised by Smiley Movement CIC, the non-profit organisation for social and environmental good that is sponsored by the original Smiley™ brand and aims to drive positive change in the world.

The final films will now be judged by a panel of experts before the winners are announced at an event in London in March.

Nicolas Loufrani, CEO of Smiley Movement, said: “Nothing captures hearts and minds like film. These amazing films from wonderful causes absolutely demonstrate the importance of film for charitable campaigning.

“It’s vital we support all causes – big or small. A huge congratulations to all the Finalists, who should be delighted with the public support for their films through the campaign. We’re incredibly proud that Smiley Movement’s investment in the Charity Film Awards has already generated 500,000 additional views on these films.”

As a charity 100% funded by donations, it is thanks to the generosity of its supporters that we were able to offer a happy home to Boo for so many years.